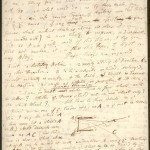 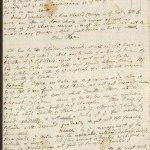 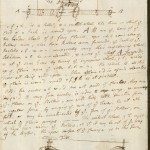 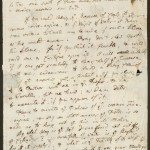 A detailed letter in which Darwin explains to Boulton his theory of a mechanically propelled car.

As I was riding Home yesterday, I concider’d the Scheme of the fiery Chariot, and the longer I contemplated this favourite Idea, the practicable it appeared to me. I shall lay my Thoughts before you, crude and indigested as they occur’d to me; telling you as well what I thought would not do, as well as what would do; as by those Hints you may be led into various Trains of thinking upon this Subject, and by that means (if any Hints can assist you Genius, which without Hints is above all other I am acquainted with) be more likely to improve, or disapprove. And as I am quite mad of this Scheme, I begg you will not mention it, or shew this Paper, to Wyot or any Body.

These things are required. First a Rotatory Motion. 2 easyly altering its Direction to any other Direction. 3 To be accelerated, retarded, destroy’d, revived instantly and easyly. 4 the Bulk, Weight, and Expence of the machine as small as possible in proportion to its Use.

I am in doubt whether three or four wheels, will be better? Whether the Power should act on one wheel only? On which wheel? Let there be three Wheels, and the Power move one of the hinder ones, as A and the rest be ? Then I say the wheel A (if there were but two wheels A and B) would describe some curve as AC: now tho’ there is also a wheel at x yet if A only be moved it will endeavour to carry the Machine som little in that direction, unless the wheel x be so turn’d by the Helm as to oppose, viz. by having its direction as the line ab, when the direction of the other wheels are cd. Now I believe this to false Reasoning, since the Lever from A to x, being so much longer than from B to A, I believe it may pass a little upon that wheel but not at all so as to alter its direction. Hence if one wheel only is to move, perhaps it may be nearly the same thing which wheel it is whether A or x.

Second, suppose four wheel, could not one Hind one, and the opposite fore one be made to move, and so only two be loose? – No! the two wheels that move, a and c, must be of equal diameters, and they will move in equal Times (or the Velocities different, so as to counteract the inequality of diameter) then let the Carriage move in a Circle, and it lies under just the same inconvenience as if both the hinder wheels were fix’d on one axis.

Hence I conclude that a three wheel’d Carriage is the best, that to move any one of those wheels, will answer as well as moving the first wheel or nearly so. And that two wheels can not be moved in any Carriage without great Friction in turning about.

Let there be two Cylinders, antagonists, at each End of the Beam, or Lever as it is call’d, which may be made of a Bar of Iron, the diameters of the Cylinders equall. And each equal…Inches. One Steam Cystern serves both, and is placed between them. NB. the agitation of the Water by the roughness of the roads will encrease the Quantity of Steam.

Remark. Suppose one Piston up, and the Vacuum made under it by the Jet d’eau froid. That Piston can not yet descend because the Cock is not yet open’d, which admits the Steam into its antagonist Cylinder. Hence the two Pistons are in equalibrio, being either of them press’d by the atmosphere. Then I say, if the Cock which admits the Steam into the antagonist Cylinder be open’d gradually and not with a Jerk, that the first mention’d Cylinder will descend gradually and yet not less forceably.

Hence by the management of the steam Cocks the Motion may be accelerated, retarded, destroy’d, revived, instantly and easily. And if this answers in Practise as it does in theory, the Machine can not fail of Success! Eureka!

The Cocks of cold water may be moved by the great work, but the Steem-Cocks must be managed by the Hand of the Charioteer, who also directs the Rudder-wheel.

A Plate follows by which this regular and managible force is made rotatory without any loss of Power or Cumber or weight of Machinery.

e f g h, is a Roller, and a rachet-wheel like those on which the Cord of a Jack is wound upon. AB are the axis of the two hinder wheels of the fiery Chariot, upon which axis also the Rollers move, when these Rollers move forwards, the Teeth of the Rachets ef and mn, reciprocally carry their neighbouring wheel. Let the arm ab be now elevated, and moves the wheel A forwards, and at the same Time by turning the ingenious wheel with contrart Teeth gh, winds up the Chain upon the roller h.l.m.n. The wheel B all this Time not being acted upon. Then when cd is again elevated the Chain is wound round efgh as at present.

NB. the curves ab and cd are not parts of Circles, the yare design’d to vary from circles in order to wrap, and unwrap the Chains on the Rollers, nor will this little deviation from a regular force, by varying the arm of the lever, be at all felt, or may be counteracted by the form of the Roller, on which the Chain wraps. – The contrat wheel gh ought to have been under the Rollers, so that it may be out of the way of the Boyler. The upper surface of the Carriage is in this Form.

The Size of the Wheel gh is of no consequence, and here lying under the Axle Tree it does no incommode the machine.

If the Force required to draw 50 Ton on common wheels is known (to find out which without an Experiment or two I don’t know) the area of each Cylinder may be got to exactness.

I have heard if 5 Horses can just stir a Carriage, six are sufficient to draw it up to London, if this be true one sixth of Power more than what will move a carriage answers our End.

If you could learn the Expence of Coals to a common Fire-engine, and the Weight of Water it draws, some certain Estimate may be made if such a Scheme as this would answer. Pray don’t shew Wyot this Scheme, for if you think it feasible, and will send me a Critique upon it, I will certainly if I can get somebody to bear half the Expense with me, endeavour to build a Fiery Chariot [and?] if it answers get a Patent. If you chuse to be Partner with me in the Profit, and Ex[pense] and Trouble, let me know: as I am deter[mined?] to execute it, if you approve of it.

Please to minute the Pulses of the common Fire-engine, and say in what manner the Piston is so made as to keep out the Air in its Motion.

By the Way is the Jet d’eau froid let out of the Cylinder? – How full of water is the Boyler? how is it supply’d, and what is the Quantity of its Wast of water? – I sent one Smith to see your Electricity of which He knows nothing, nor, is like to know, but it seems He is a retail dealer in your way of Business.