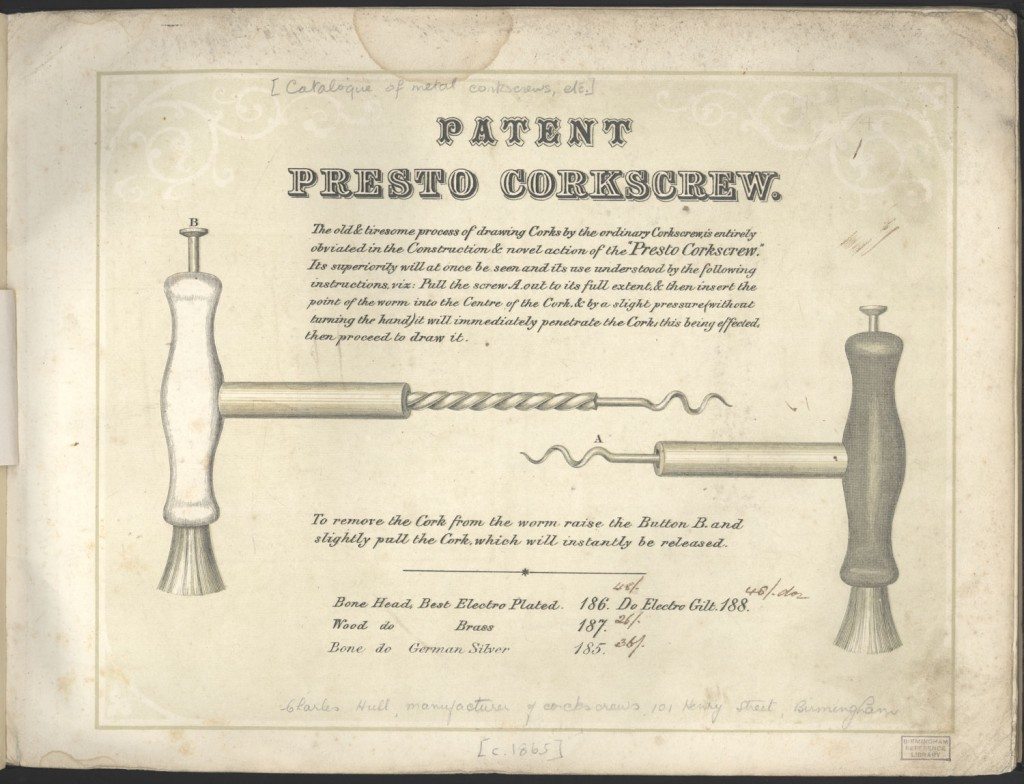 The old & tiresome process of drawing Corks by the ordinary Corkscrew is entirely obviated in the Construction and novel action of the “Presto Corkscrew”. Its superiority will at once be seen and its use understood by the following instructions, viz: Pull the screw A out to its full extent, & then insert the point of the worm into the Centre of the Cork, & by a slight pressure (without turning the hand) it will immediately penetrate the Cork, this being effected, then proceed to draw it. To remove the Cork from the worm raise the Button B and slightly pull the Cork, which will instantly be released.

Birmingham became the centre of corkscrew manufacturing after a London clergyman, the Rev Samuel Henshall was granted a patent in 1795. It held the corkscrew to the cork once the screw had been turned into it. Further pressure released the cork from its seal and made extraction easier. Matthew Boulton was the first to make Henshall’s product and other entrepreneurs followed. Between 1795 and 1908, nearly 350 British patents were awarded for corkscrew design. One was Edward Thomason whose patent of 1802 used a double screw to improve extraction.
Birmingham dominated the world market in corkscrew manufacturing in the late 18th and 19th centuries. The presence of enterprising engineering businesses and skilled workers and the availability of raw materials enabled the town to maintain its importance. Not all patentees lived in Birmingham, but their inventions were manufactured there.

By the mid-19th century Birmingham manufacturers were adapting these innovations into a variety of types, shapes and sizes. Dix’s Directory of Birmingham in 1858 lists sixteen businesses. One firm was Charles Hull, Manufacturer of Corkscrews, 101 Henry Street, Birmingham. The catalogue of the business, dating from about 1865 is reproduced in this exhibition. Charles Hull not only made an extraordinary number of corkscrews, but also other small metal objects using the lever principle, such as nut crackers, candle snuffers and button hooks. 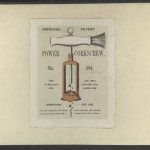 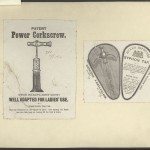 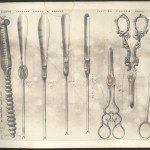 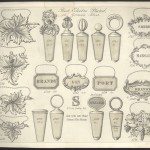 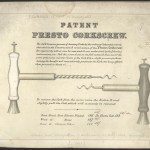 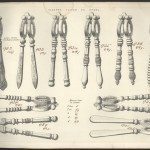 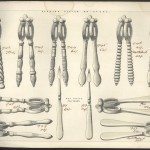 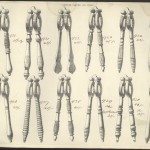 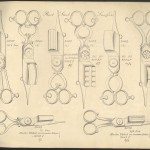 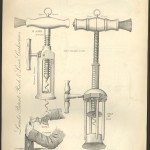 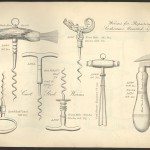 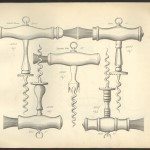 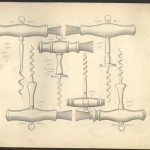 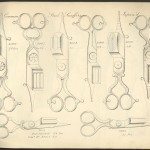 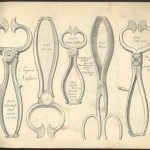 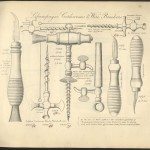 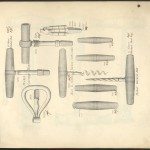 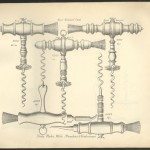 Soda Water Wire Breakers and Corkscrews
Most read
Chronology of principal events that occurred during the Industrial Revolution in the West Midlands. Significant places in the historic counties of Derbyshire, Herefordshire, Shropshire, Staffordshire, Worcestershire and Warwickshire during the Industrial Revolution. Industrialists, engineers, artists, thinkers and writers who contributed to the Industrial Enlightenment, technology, art, culture, religion and politics. Explorations of industries and innovations; landscapes and localities; art and architecture; culture and diversity; and the place of the West Midlands in the contemporary world.
Revolutionary Players was developed between 2002 and 2004 and financed by the New Opportunities Fund. Revolutionary Players was created by Dr Malcolm Dick & Dr Kate Iles and managed by Birmingham Museums until 2015. Revolutionary Players is now published and funded by History West Midlands.