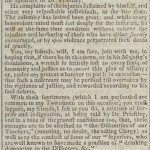 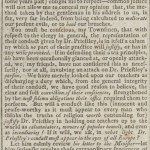 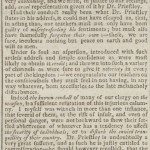 Aris’s Birmingham Gazette – Letter to Aris’s about Dr. Priestley and the Birmingham Riots

To the Inhabitants of the Town of Birmingham.

IT is with extreme concern and reluctance that I offer a few remarks on the letter which has lately been addressed to us, in several London papers, under the signature of Dr. Priestley.

He complains of the injuries sustained by himself, and other very respectable individuals, in the late riots. The calamity has indeed been great; and while every benevolent mind must feel deeply for the sufferers, he will at the same time condemn without reserve the injustice and barbarity of those who have either secretly encouraged, or by open violence perpetrated such deeds of cruelty.

You, my friends, will, I am sure, join with me, in hoping that, if there be in this town, or in his Majesty’s dominions, a wretch so in intirely lost to every sense of humanity and justice as to concert this plan of villany; or, under any pretext whatever to put it in execution – that such a miscreant may be pursued till overtaken by the vigilance of justice, and rewarded according to his foul deserts.

With these sentiments (which I am persuaded are common to my Townsmen on this occasion) you must suppose, my friends, I felt as you do, a mixture of surprise and indignation, at being told by Dr. Priestley, and in a tone of the gravest confidence too, that, these outrages are to be ascribed to “the Discourses of our Teachers,” (meaning, no doubt, the acting Clergy) as well as to the conduct of some of our “superiors, who are well known to have made a practice of “drinking damnation to the Dissenters, &c.”

Who these our superiors are, who can allow themselves in such habits of indecency and profaneness, I profess myself very happy in not knowing; – but of the conduct of our teachers, long observation and experience, have taught me something; and to this I can speak explicitly.

I am fully aware, with you, my friends, that the present is a very delicate conjuncture, and that every precaution should be taken to allay, rather than to excite, or increase, the very unhappy resentments which the late disorders have produced. I can, at the same time, allow to the feelings of an injured man every thing that can reasonably be demanded in apology for Dr. Priestley on this occasion. Justice, however, to the character of a body of men whom their known moderation (in so critical a situation as this has been for some years past) obliges me to respect – common justice will not allow me to conceal my opinion that, the method taken by that gentleman in his address to us, is far, very far indeed, from being calculated to meliorate our present evils, or to heal our breaches.

You must be conscious, my Townsmen, that with respect to the clergy in general, the representation of their conduct by Dr. Priestley, is in itself a calumny which no part of their practice will justify, or has in any wise provoked. If in defending their own principles, his have been occasionally glanced at, or openly attacked, we, my friends, have not considered this as necessarily, nor at all, involving an attack on Dr. Priestley’s person. We have merely looked upon our teachers as discharging a duty which, from the general integrity of their conduct, we have good reason to believe, the clear and full conviction of their consciences, strengthened by the most solemn obligations their office required them to perform. But will a conduct like this (innocent and praise-worthy as it must appear to every man who thinks the truths of religion worth contending for) justify Dr. Priestley in holding our teacher up to the world and calumniators, movers of popular tumult, and even as incendiaries! If it will, we ask, in what light Dr. Priestley’s conduct must appear in the eyes of all Europe?

Let him calmly review his letter to the Minister – let him seriously revolve those extraordinary specimens of plain argument and perfect good temper, his Familiar Addresses to us; and before he closes the review, let him call to mind a certain preface, never to be forgotten, of which one of our teachers was accidentally the occasion; and if he must still persist in charging the late disturbances on the discourses, preached or published, of individuals; we intreat him, in the presence of the great searcher of hearts, to consider – to whose discourse those public disorders are most reasonably to be ascribed, to his own, or to those of our teachers.

We, who are certainly the best judges of what their conduct has been with reference to Dr. Priestley, are witnesses for them, that in whatever abhorrence they may hold some of his opinions; with regard to his person, or those of Dissenters in general, the tendency of their public discourse has been in direct contradiction to the very unbecoming, and we must, in justice to our feelings, add, cruel representation given of it by Dr. Priestley.

Had their conduct really been what Dr. Priestley states in his address, it could not have escaped us, that in acting thus, our teachers must not only have been guilty of misrepresenting his sentiments; but must also have shamefully forgotten their own:-these, we are sure, inculcate nothing but peace on earth and good will to men.

Under so foul an aspersion, introduced with such artless address and simple confidence as were most likely to obtain it credit; and thrown in such a variety of channels as were sure to give it notoriety in every part of the kingdom:- we congratulate our teachers on the consciousness they must feel in not having, in any way whatever, been accessaries to the late melancholy disturbances.

Indeed the known conduct of many of our clergy on the occasion, is a sufficient refutation of this injurious calumny. I myself was witness in more than one instance, that several of them, at the risk of insult, and even of personal danger, were not backward to shew their settled abhorrence of whatever has a tendency to affect the security of individuals, or to disturb the envied tranquillity of their country. Dr. Priestley is undoubtedly a very great sufferer, and as such he is justly entitled to commiseration – he should however recollect, that the way to obtain that sympathy, and to secure the good opinion of his fellow citizens in general, is not by thus wantonly attacking the characters of the innocent.