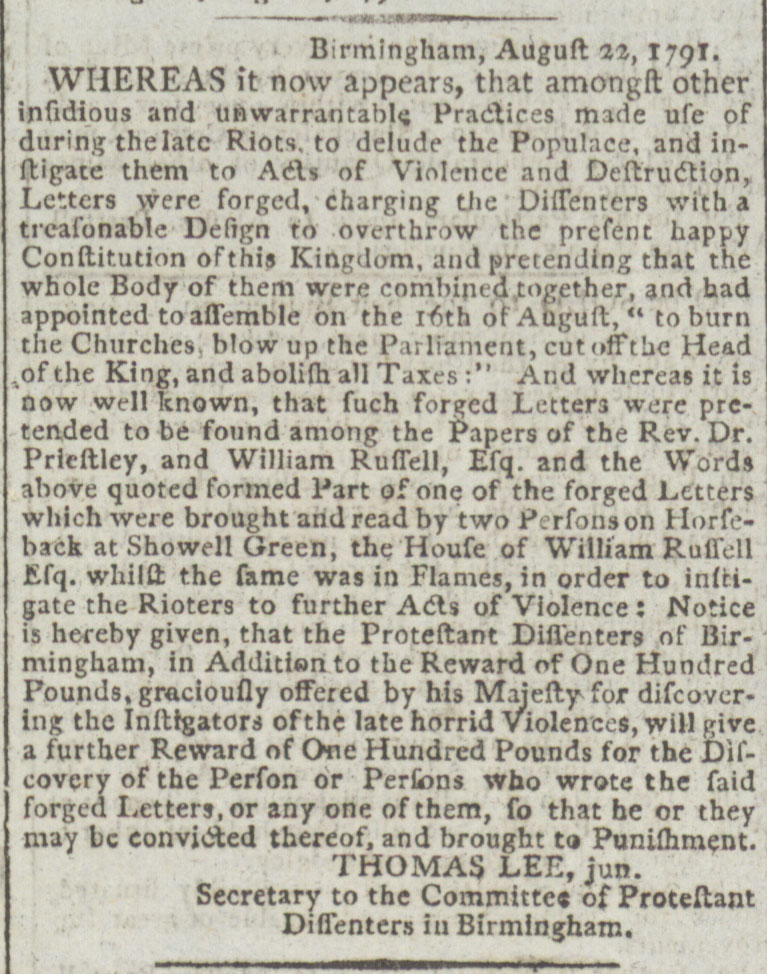 WHEREAS it now appears, that amongst other insidious and unwarrantable Practices made use of during the late Riots to delude the Populace, and instigate them to Acts of Violence and Destruction, Letters were forged, charging the Dissenters with a treasonable Design to overthrow the present happy Constitution of this Kingdom, and pretending that the whole Body of them were combined together, and had appointed to assemble on the 16th of August, “to burn the Churches, blow up the Parliament, cut off the Head of the King, and abolish all Taxes:” And whereas it is now well known, that such forged Letters were pretended to be found among the Papers of the Rev. Dr. Priestley, and William Russell, Esq. and the Words above quoted formed Part of one of the forged Letters which were brought and read by two Persons on Horseback at Showell Green, the House of William Russell Esq. whilst the same was in Flames in order to instigate the Rioters to further Acts of Violence: Notice is hereby given, that the Protestant Dissenters of Birmingham, in Addition to the Reward of One Hundred Pounds, graciously offered by his Majesty for discovering the Instigators of the late horrid Violences, will give a further Reward of One Hundred Pounds for the Discovery of the Person or Persons who wrote the said forged Letters, or any one of them, so that he or they may be convicted thereof, and brought to Punishment.
THOMAS LEE, jun.

Secretary to the Committee of Protestant Dissenters in Birmingham.