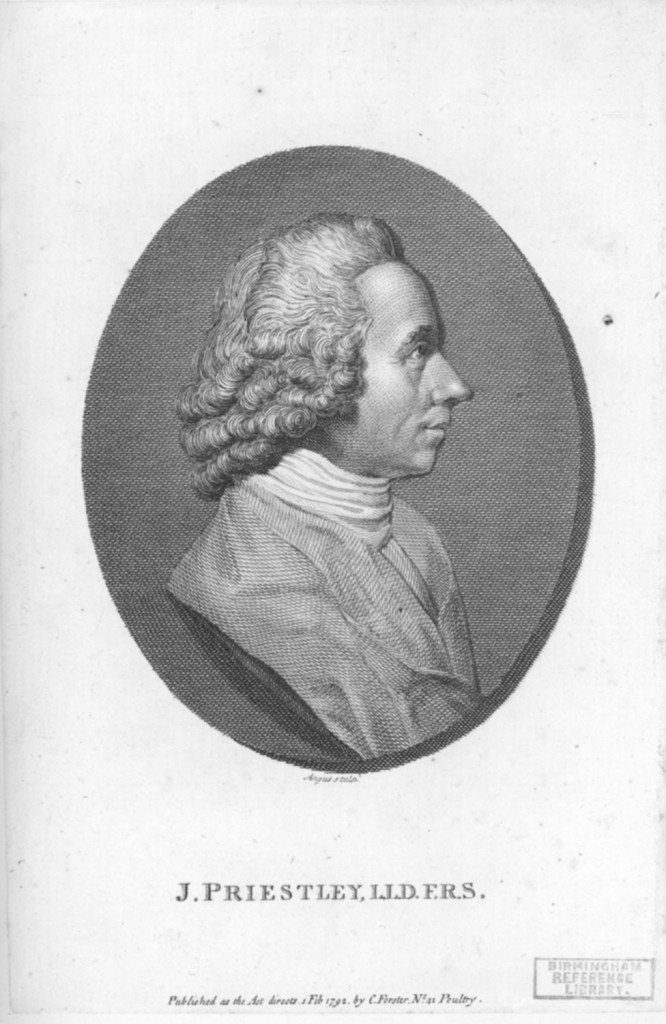 A Portrait of Rev. Joseph Priestley

Born into a Yorkshire wool manufacturing family in 1733, Priestley was raised as a nonconformist and proved to be a gifted scholar. By the age of twenty he had learned Latin, Greek, Hebrew, French, German, Italian, Arabic and other languages. He also showed an interest in science. In 1751 he entered the Dissenting Academy at Daventry to begin theological training, becoming a minister in Suffolk and subsequently in Cheshire.

Priestley joined the teaching staff at Warrington Academy in 1761, one of the premier higher education institutions in Britain, where he lectured in English, Latin and History and wrote his Essay on Government (1768). It argued that the purpose of government should be to promote the “greatest happiness of the greatest number”. He met Benjamin Franklin who encouraged him to write his History of Electricity (1767).

In 1762 Priestley married Mary Wilkinson, the daughter of Isaac Wilkinson, the ironmaster and sister of John “iron-mad” Wilkinson. He left Warrington in 1767, becoming a minister in Leeds. Here he resumed his theological studies and engaged in scientific experiments. Between 1772 and 1780 and financed by Lord Shelburne, Priestley was able to publish his philosophical studies and scientific experiments. He isolated “dephlogisticated air” or oxygen and investigated other gases. He acquired a European reputation for his contributions to knowledge.

Priestley moved to Birmingham in 1780, settling at Fairhill. He became a Unitarian minister, met with other members of the Lunar Society and created a laboratory for his scientific experiments. He later described his time in Birmingham as the happiest in his life. Priestley preached, published and campaigned. A promoter of religious and political liberty he also attacked slavery and defended the French Revolution against the critical writings of Edmund Burke. In 1791 during the anti-radical “Priestley Riots”, his house, library and laboratory were destroyed and he was forced to leave Birmingham.

In 1794, Priestley left England for the USA where he died in 1804. Priestley was one of the eighteenth century’s most significant thinkers. The breadth of his knowledge and interests were immense, covering philosophy, theology, experimentation, politics and social questions.