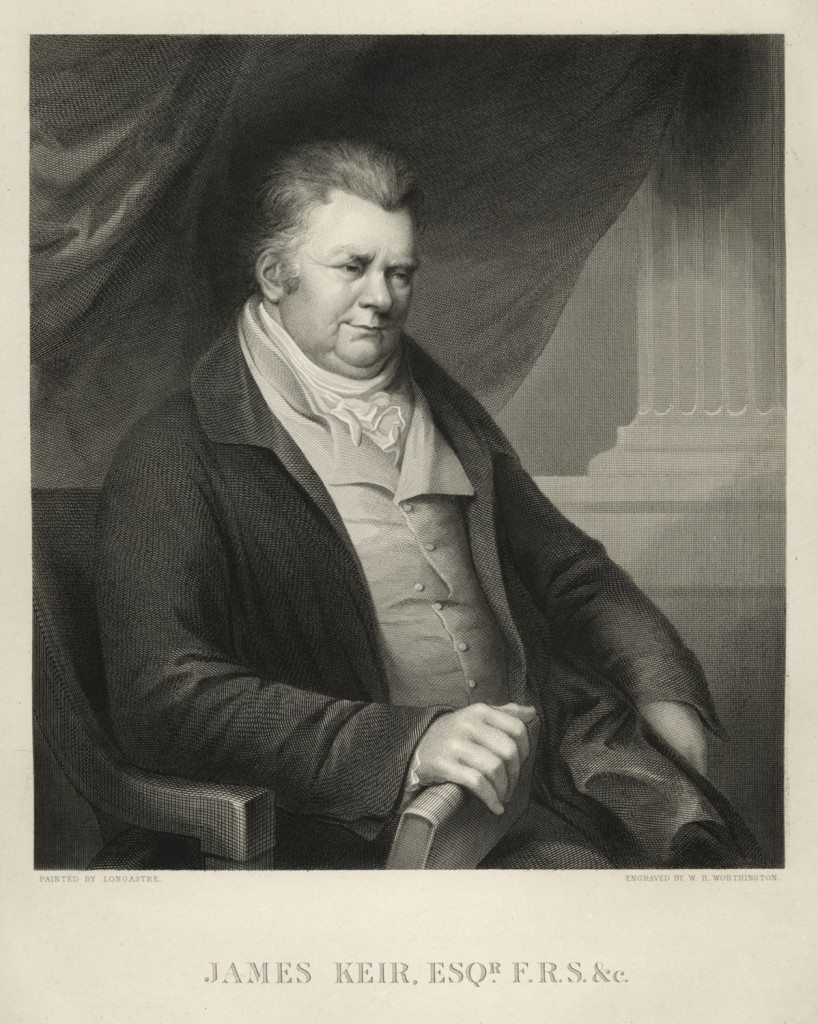 A Portrait of James Keir

James Keir was born in Stirlingshire, Scotland in 1735. He studied medicine at Edinburgh University and became a close friend of Erasmus Darwin, a fellow student. In 1757 he joined the army to see other countries and served in the West Indies, but unlike most of his fellow officers, he spent much of his time studying and writing. He resigned his commission in 1768, having reached the rank of captain and then moved to the West Midlands, where he met other members of the Lunar Society, including Boulton and Watt. Keir settled at Hill Top, West Bromwich and devoted himself to chemical experiments, geological investigations and industrial innovation.

In 1775 he began to manufacture glass at Stourbridge and engaged in experimentation. In the late 1770s he published work on glass and gases and translated a French dictionary of chemistry. Keir gave up his glass business in 1778 and became sole manager of the Soho Engineering Works during the absence of Boulton and Watt, but he declined their offer of a partnership. In 1779 Keir patented a metal made of copper, zinc and iron which was capable of being forged when red-hot or cold. In conjunction with his army friend, Alexander Blair, he set up a chemical works at Tipton in 1780 to manufacture alkali and soap. When Priestley came to Birmingham in the same year, they worked closely together, both had an interest in the properties of gases. Like several other Lunar Men, he was elected a Fellow of the Royal Society.

Keir had other talents and interests. He suggested improvements to the second part of Erasmus Darwin’s Botanic Garden. After the death of Thomas Day, at his widow’s request he composed a biography of his fellow member of the Lunar Society. Keir also supported the French Revolution and he was attacked for them at the time of the Priestley Riots in 1791, but he defended himself vigorously in a series of pamphlets.

Keir and Blair established a colliery at Tividale, near Dudley in 1794. This enabled him to extend his geological researches. He contributed detailed information on the mineralogy and manufacturing industries of Staffordshire to Stebbing Shaw’s History of Staffordshirein 1798.

Keir died at West Bromwich in 1820. We know less about him than most other major Lunar Society figures because his papers were destroyed in a house fire in 1845, but he had close, supportive friendships with the other Lunar men and his contribution to scientific and industrial life was considerable His daughter, Amelia provided an account of his life.