Home·Browse·View in the Stretton Hills 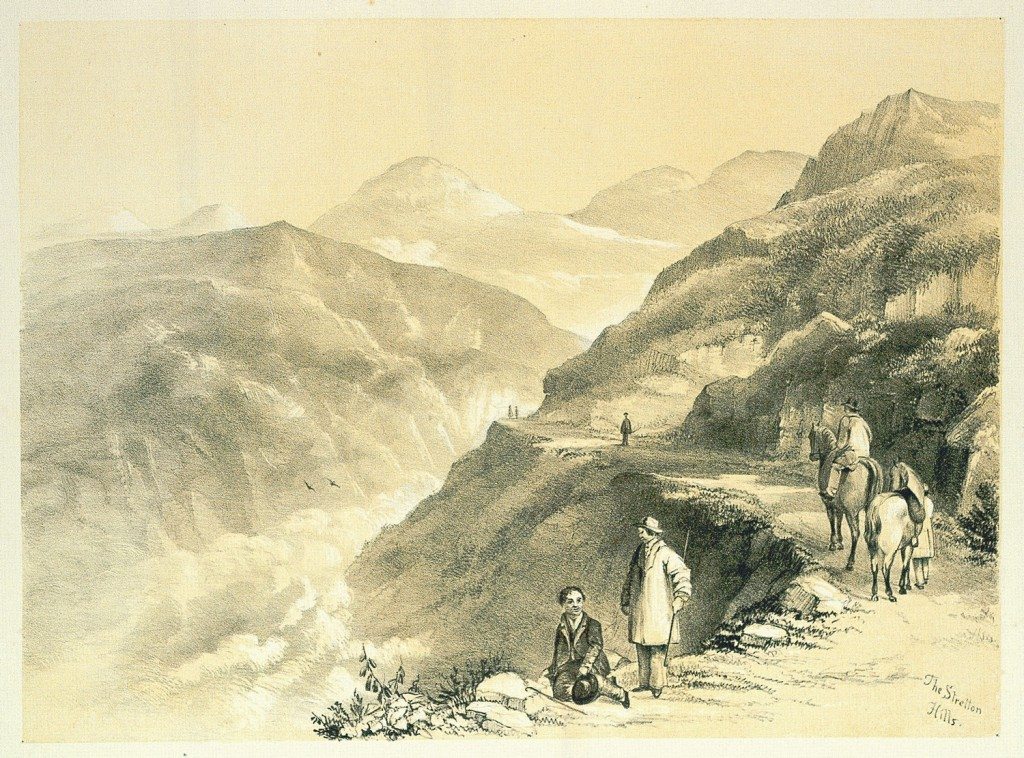 View in the Stretton Hills

The principal design of this drawing, taken about half-a-mile from Church Stretton, on the old road to Bishop’s Castle, is to show the wild and sublime character of some of the scenery of Shropshire, in contrast with other richer and more fertile portions of the county, the subjects of former drawings, and also as connected with the most interesting portion of our earliest British history. Many more drawings of the same character might be made amongst the numerous mountains that distinguish this part of Shropshire, most of which have their separate tale of blood, originating in the ancient struggles of our ancestors against the encroachments of the Roman invaders. These mountains were the strong fastnesses, the natural bulwarks of the country, and were contested inch by inch till the Roman conqueror planted his standard on them all; then were the people subdued. Caractacus, the British prince, whose name will be coeval with England’s history, here made his last desperate resistance. He had opposed with varied success the progress of the Roman army for Dorchester, near the mouth of the Thames, along the course of that river; but the Romans, strengthened and encouraged by new accessions of troops, and the arrival of the Emperor Claudius himself, obliged the Britons to give way, and received the submission of the southern and eastern tribes of England. Caractacus still kept the field, and held around him the braver spirits of his people, who cherished the love of independence and liberty. But when he could no longer oppose the armies under the command of Ostorius Scapula, now arrived to take the command of the Romans, he retreated to the mountains and fastnesses Shropshire, formed encampments on their summits, and defended them one by one.

The hill in the centre of the picture is called after his name the Caradoc, and was the first of the chain that received the final shock of the enemy, which was to vibrate till their liberty was extinct. After the battle, the effects of which are still visible in the various tumuli on several neighbouring hills, though eighteen hundred years have elapsed since their formation, he and his followers retired along the chain of the Longmont, and again collecting their forces, made another stand at Bury Ditches, near Bishop’s Castle. Being again driven hence, they made a final effort at Caer Caradoc, near Clun, being joined by some more forces under the command of the brother of Caractacus. Prior to the commencement of the battle which ensued, Caractacus endeavoured to rouse the dying spirit of the British troops by an address in which he reminded them of their ancient valour, of the glory to be won by conquering their enemies, restoring liberty to their nation, and saving their wives and daughters from ignominy and shame. The ardent but almost extinguished flame of love of country and kindred was powerfully rekindled, and with rapturous bursts of applause, they vowed to conquer or to die. But Ostorius Scapula with irresistible force urged on his invincible legions to the attack, who, in defiance of the brave but almost naked Britons, who darts and missiles fell powerless from the iron panoply of the veteran conquerors, forced their way up the hill, broke down the ramparts, and after a close and severe conflict, by superior discipline and arms, with undaunted courage, routed the brave troops of Caractacus. His wife, daughter and brethren were taken prisoners, and he only escaped to be betrayed by Cartismunda, Queen of the Brigantines, into the hands of Ostorius, who sent him a captive in triumph to Rome.

In the valley, to which the road in the drawing tends, is the romantic town of Church Stretton. Embossed in hills, it has not inaptly been compared to Dinas Mowddy and Dolgelly, in Merionethshire. Although its highest mountain, Caer Caradoc, cannot compare with Cader Idris, the giant of Merionethshire, and the most picturesque mountain in the principality, yet splendid prospects are to be obtained from it; and ample exercise is afforded to the tourist or invalid who may resort thither, and ascend this less stupendous eminence.

The hills on the left are the Lawley; and the Wrekin in the distance.