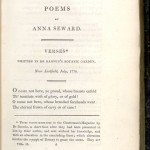 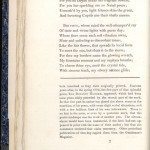 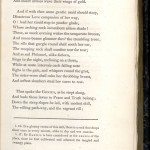 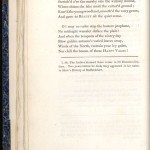 O come not here, ye proud, who breasts enfold
Th’ insatiate wish of glory, or of gold!
O come not here, whose branded foreheads wear
The eternal frown of envy or of care!

* These verses were sent to the Gentleman’s Magazine by Dr Darwin, a short time after they had been presented to him by their author, and sent without her knowledge, and with an alteration in the concluding lines; which alteration invokes the nymph of Botany to grace the scene. They are here inscribed as they were originally printed. Fourteen years after, in the spring 1792, the first part of that splendid poem, THE BOTANIC GARDEN, appeared, which had been some years oddly preceded by the second part of the work. In that first part its author has placed the above verses as the exordium of his poem, with some slight verbal alterations, and with a few brilliant lines of his own interwoven. There is no hint of the notes, or even by a quotation mark, that this poetic landscape was the work of another pen. The circumstance would have been immaterial, if the lines had not appeared in print with the name of their author; but that circumstance rendered that claim necessary. Other periodical publications of that day copied them from the Gentleman’s Magazine.

For you no Dryad decks her fragrant bowers,
For you her sparkling urn no Naiad pours;
Unmask’d by you, light Graces skim the green,
And hovering Cupids aim their shafts unseen.
But THOU, whose mind the well-attemper’d ray
Of taste and virtue lights with purer day;
Whose finer sense each soft vibration owns,
Mute and unfeeling to discordant tones;
Like the fair flower, that spreads it lucid form
To meet the sun, but shuts it to the storm;
For thee my borders name the glowing wreath,
My fountains murmur and my zephyrs breathe;
To charm thine eye, amid the crystal tide,
With sinuous track, my silvery nations glide;

My choral birds their vivid plumes unfold,
And insect armies wave their wings of gold.
And if with thee some gentle maid should stray,
Disastrous Love companion of her way,
O! lead her timid step to yonder glade,
Whose arching rock incumbent alders shade!
These, as meek evening wakes the temperate breeze,
And moon-beams glimmer thro’ the trembling trees,
The rills that gurgle round shall sooth her ear,
The weeping rock shall number tear for tear;
And as sad Philomel, alike forlorn,
Sings to the night, reclining on a thorn,
While at mute intervals each falling note
Sighs in the gale, and whispers round the grot,
The sister-woes shall calm her throbbing breast,
And softest slumbers steal her cares to rest.
Thus spoke the GENIUS, as he stept along,
And bade these lawns to Peace and Truth belong;
Down the steep slopes he led, with modest skill,
The willing path-way, and the vagrant rill;

l.10. In a gloomy recess of this dell, there is a rock that drops about once in every minute, alike in dry and wet seasons.
l.17. Dr DARWIN is here considered as the GENIUS of the place, since he first cultivated and adorned the tangled and swampy plain.

Stretch’d o’er the marshy vale the willowy mound,
Where shines the lake amid the cultur’d ground;
Rear’d the young woodland, smooth’d the wavy green,
And gave to BEAUTY all the quiet scene.
O! may no ruder step the bowers prophane,
No midnight wassaler deface the plain!
And when the tempests of the wintry day
Blow golden autumn’s varied leaves away,
Winds of the North, restrain your icy gales,
Nor chill the bosom of these HAPPY VALES!

1. 10. The Author claimed these verses in Dr Darwin’s life-time. Two years before he died, they appeared in her name, in Shaw’s History of Staffordshire.