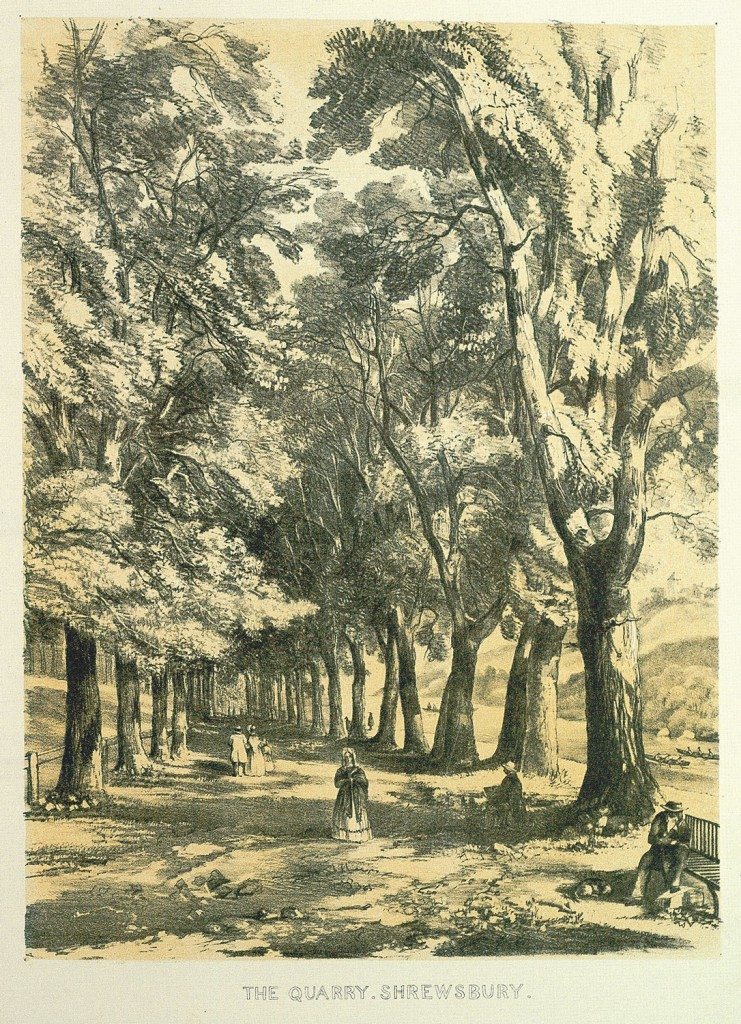 The accompanying drawing is a representation of that noble and delightful promenade, justly included amongst the finest in the kingdom, which forms one of the many attraction the town of Shrewsbury possesses. It was formed and planted by order of the Mayor of the town, in the beginning of the eighteenth century, on a piece of flat ground in which were some quarries of red stone, adjoining the Severn, which gave rise to the present name: these quarries have now become pools, and are overshadowed by trees of full growth, dripping their branches into the water. The lower walk, in which the present drawing was made, is five hundred and forty yards in length, and from it three others run cross-wise towards the town. They are all shaded by lofty lime trees, intermingling their thousand arms above, and forming that agreeable variety which nature alone can produce in perfection. The Severn runs by the side of the long walk, and increases by its reflection, and the silence of its motion, the charm that is felt on entering these peaceful and pleasant walks. Sometimes the scene is enlivened by rowing parties exercising their strength and skill in rivalry, and their shouts of defiance and raillery, and the plashes of their oars, echo through the leafy arches.

The land on the right of the picture is Kingsland Bank, on which stand the lunatic asylum and house of industry, formerly the orphan house, erected by the orphan society. On the top of Kingsland the trading companies of Shrewsbury hold their annual show, and at such time it is a scene of much mirth and joyful festivity.

Close to the Quarry is the elegant church of St. Chad; and behind the spectator is the Welsh Bridge. A description of the town itself is not attempted here, but will accompany a future drawing.