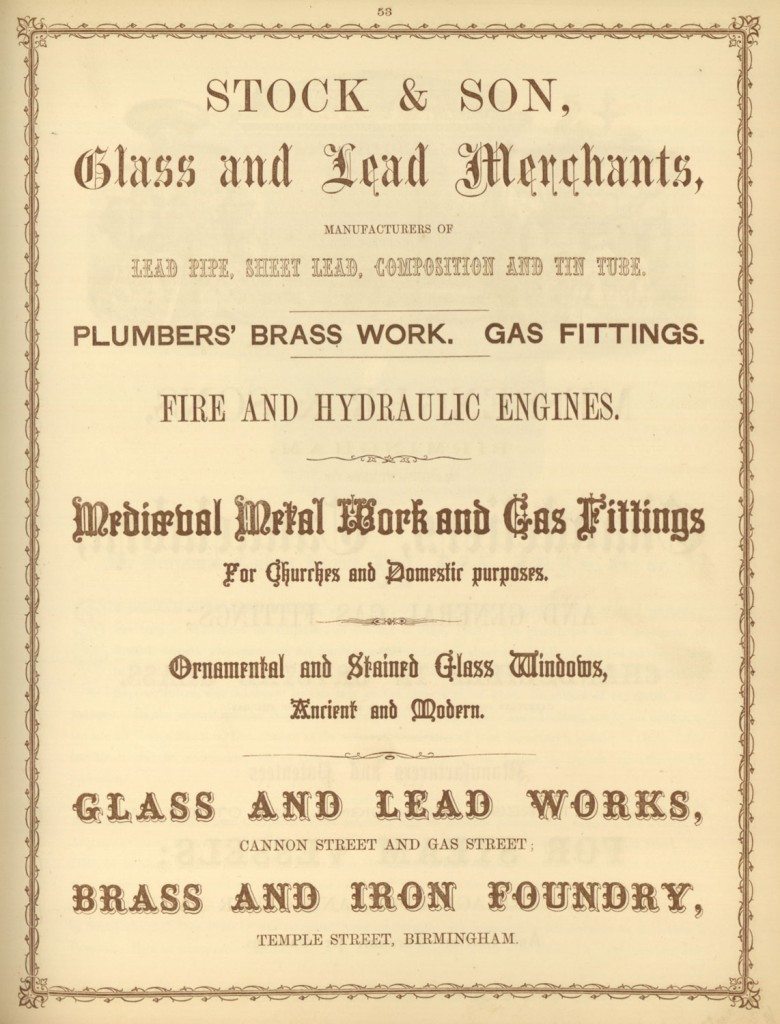 The mode of making Flint Glass is in some respects similar to that resorted to for crown glass. As an example of the process let us select the instance of a water jug. The workman takes a ball of metal on the end of his iron, or blowing tube, lengthens it by whirling round his head, rolls it on an iron slab and then renders it hollow by blowing. Another workman now takes the rough mass and sitting down in a chair with arms sloping downwards, rolls the tube rapidly on the arms of the chair, while a boy, by blowing through the end, preserves the hollowness of the article in course of formation. The workman now, by the aid of pincers, shapes the metal into the form of a jug; another workman brings more metal and applies it so as to form a foot and the whole is transferred from the tube to an iron rod or “pontil,” which is attached by the help of a little more of the hot metal. The operator next with a pair of scissors, cuts out a piece of the glass to allow of the lip of the jug being depressed; he then passes the pincers rapidly over the outside and the interior of the jug, thus bringing it into shape; fresh metal is then attached and moulded into the shape of a handle. During this process the rod has to be constantly kept revolving, otherwise the glass would drop off and the metal has occasionally to be heated, in order to keep it at the proper consistency for easy working. When the form of the jug is complete it is annealed and afterwards cut by iron or stone wheels, with sand, and polished with wooden wheels and “putty powder” or engraved by being subjected to the action of copper wheels, supplied with emery and oil, worked in a lathe. This is the process adopted in all articles made of the best flint glass; but glass is also ‘pressed’ in a mould corresponding in internal shape to the article to be made and most of the cheaper goods are produced by this method, by the adoption of which the cost of manual labour is greatly diminished and the expense of cutting is entirely saved. Coloured glass is formed by adding to the ordinary mixtures of the oxides of certain metals; but when the glass is required to be merely coated with colour, it is subjected to a process called ‘flashing’, that is, white glass is allowed to cool a little and is then dipped into a pot containing coloured glass; when it is withdrawn a coating is attached to the white glass and as it hardens, becomes incorporated with it. By carefully graduating the temperature, several colours maybe thus superimposed upon one another and then, by cutting very brilliant effects may be produced. Glass is further ornamented by gilding, enamelling and painting. In each case the colours are fixed by the action of heat and are, as in the case of gilding, afterwards brought out by burnishing. This notice has already extended to so great a length, that we are compelled to omit all mention of many other most interesting processes. For example, we can only just allude to the production of stained windows for churches and domestic buildings, which forms an important branch of trade in Birmingham and other places; to the manufacture of glass for optical and chemical purposes and to the manufacture of glass bottles, of which many millions are made every year.