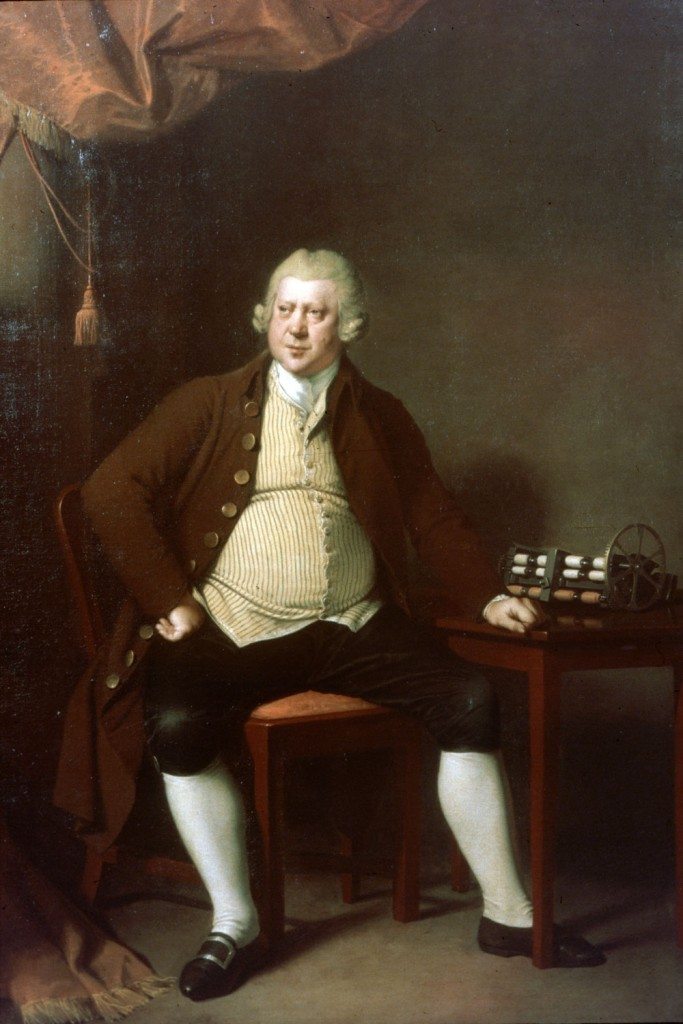 The art of portraiture was changing during the Industrial Revolution. The expansion of commerce and industry in the eighteenth century brought new characters to artists’ attention. Not only flamboyant figures of the High Society but also pragmatic and materialistic provincial middle-class entrepreneurs became to appear on artists’ canvasses.

Richard Arkwright (1732-1792) was the youngest of thirteen children of a poor family from Preston. He started work as a barber and peruke-maker. However, he had strong ambitions to set up an independent business and run his own company. In the 1760s, he came across the attempts of John Kay, a clockmaker from Warrington, to produce new machines for the textile industry. Arkwright was impressed by Kay. He employed him, and also recruited other local craftsman to help. The team designed soon a Spinning-Frame which was able to produce a thread far stronger than that made by the Spinning-Jenny invented earlier by James Hargreaves (c.1720-1778).
Arkwright set up a large factory next to the River Derwent at Cromford, Derbyshire, partly financed by Jedediah Strutt and his partner Samuel Need of Nottingham. He soon grew enormously rich. The factory worked 23 hours a day and several hundred workers including children were employed there. Arkwright’s demand for workers was such that he imported them from all over Derbyshire. Cotton-spinning at Cromford is now considered to be one of central achievements of the Industrial Revolution and the town is now part of a world heritage site.

Erasmus Darwin praised his spinning process in The Loves of the Plants:

With quicken’d pace successive rollers move
And these retain, and those extend the rove;
Then fly the spooles, the rapid axes glow; –
And slowly circumvolves the labouring wheel below.

Though they were fascinated by his achievements, several of his contemporaries disliked Arkwright, and were on awkward terms with him. James Watt wrote: ‘as to Mr Arkwright, he is, to say no worse one of the most self sufficient Ignorant men I have ever met with.’ Matthew Boulton echoed this remark and described him as: ‘A Tyrant and more absolute than a Bashaw [Pasha]’.

Wright’s portraits of Richard Arkwright and of Jedediah Strutt were painted at almost the same time. They were people who had similar backgrounds and status, but they had contrasting natures. This contrast was captured by the artist. Painting Jedediah Strutt, Wright expressed his liking and respect for him. In “Portrait of Sir Richard Arkwrigh” we can clearly see the sitter’s smugness, high opinion of himself, and self-satisfied vanity. Many years later Thomas Carlyle (1795-1881) vividly reacted to Wright’s masterpiece: ‘A plain, almost gross, bag-cheeked, pot-bellied man, with an air of painful reflection, yet almost copious free digestion’.

Download PDF of article
Sources and Further Reading Fitton, R.S., The Arkwrights: Spinners of Fortune (Manchester, Manchester University Press, 1988)
Most read
Chronology of principal events that occurred during the Industrial Revolution in the West Midlands. Significant places in the historic counties of Derbyshire, Herefordshire, Shropshire, Staffordshire, Worcestershire and Warwickshire during the Industrial Revolution. Industrialists, engineers, artists, thinkers and writers who contributed to the Industrial Enlightenment, technology, art, culture, religion and politics. Explorations of industries and innovations; landscapes and localities; art and architecture; culture and diversity; and the place of the West Midlands in the contemporary world.
Revolutionary Players was developed between 2002 and 2004 and financed by the New Opportunities Fund. Revolutionary Players was created by Dr Malcolm Dick & Dr Kate Iles and managed by Birmingham Museums until 2015. Revolutionary Players is now published and funded by History West Midlands.