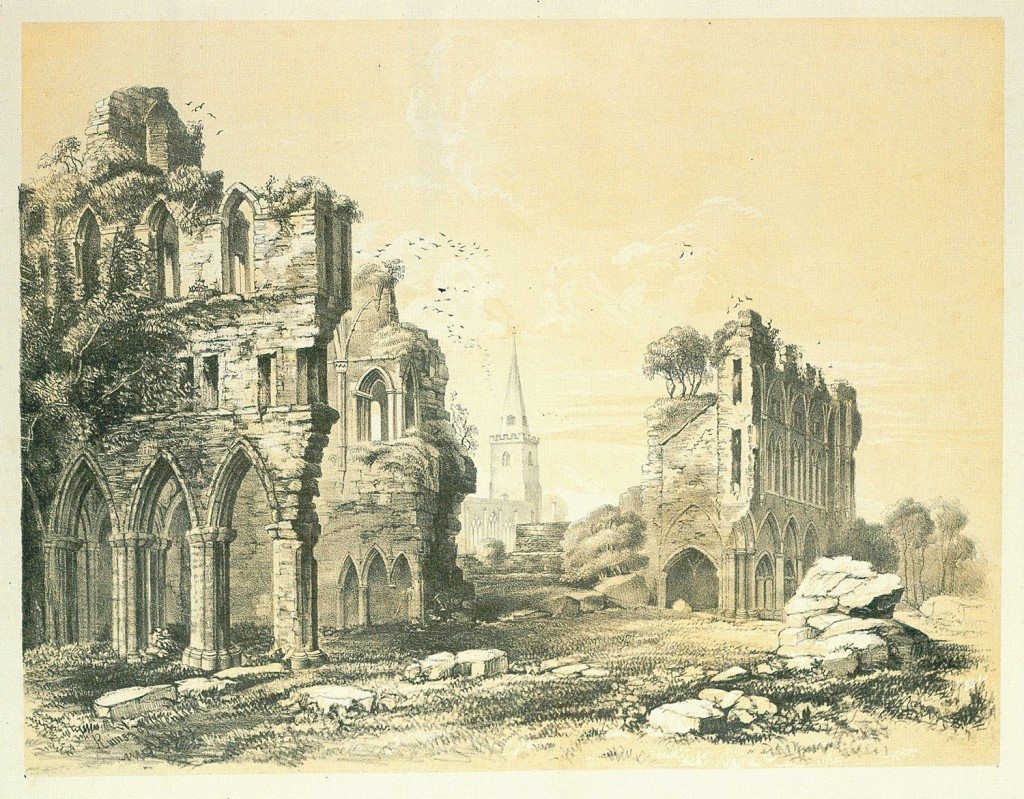 Wenlock Abbey was founded about the year 680, by MILBURGA, daughter of King MERWALD, and niece to WOLPHERE, King of Mercia. She presided as abbess, and was buried there. The town was first called Wimnicas, but in later times Wenlock Magna, and Much Wenlock. “The abbey was destroyed by the Danes, but restored buy LEOFRIC, Earl of Chester, in the time of Edward the Confessor; but again falling into decay, and being forsaken, it was in the fourteenth of WILLIAM the Conqueror, built and endowed by ROGER DE MONTGOMERY, Earl of Arundel, Chichester, and Shrewsbury. But BROMPTON and LELAND attribute it restoration to WARINE, Earl of Shrewsbury.” Some beautiful fragments remain which shew it to have been a spacious and stately fabric, little inferior in size and beauty to most cathedrals.

The detached portion which forms the principle feature in the drawing, “of the pure early gothic of the thirteenth century,” is part of the south side of the nave of the church, and a little of the west front as far as the clustered pillars, which formed that side of the great window, beneath which was the great door of entrance. “There are three pointed arches which have never been open; within these are lower arches, on strong pillars, which communicated with the south side aisle. Over the higher arches are remains of a beautiful gallery, which ran along the whole second story of the church, and consisted of a series of two-pointed arches, divided by slender clustered pillars; above these are single lancet windows, forming the clere story. Between the arches and windows run slender clustered pillars, and where they break off at the top are remains of the ramifications of a groined ceiling. Part of this side aisle is now a stable; it has a groined roof, and over it is a large vaulted chamber.”

The other portion of the drawing on the left, represents what is left of the south wing of the transept. The ruinous heaps in the foreground are the “lower members of the great columns which supported the centre steeple:” they are dilapidated indeed. Other portions remain of the building, particularly the chapter house, very beautiful, and the prior’s lodge, now a farm house, which contains some very fine relics. This noble ruin, stately in decay, is the property of SIR WATKIN WILLIAMS WYNNE, BART.

The following curious and interesting particulars concerning Wenlock Abbey and its founder ST. MILBURGA, are related by WILLIAM of Malmsbury, in his history of EDWARD the Confessor. “MILBURGA reposes at Wenlock, formerly well known to neighbouring inhabitants, but for some time after the arrival of the Normans, through ignorance of the place of her burial, she was neglected. Lately however, a convent of Cluniac monks being established there, while a new church was erecting, a certain boy running violently along the pavement, broke into a hollow of the vault, and discovered the body of a virgin, when a balsamic odour pervaded the whole church: she was taken up, and performed so many miracles, that the people flocked thither in great multitudes. Large spreading plains could hardly contain the troops of pilgrims, while rich and poor came side by side, one common faith impelling all. Nor did the event deceive their expectation; for no one departed without either a perfect cure or considerable abatement of his malady, and some were even healed of the king’s evil by the merits of this virgin, were medical assistance was unavailing.”

The town of Much Wenlock, in which the ruins stands, is very ancient. It sends two members to parliament, one of whom for the last two centuries has been of the FORESTER family, of Willey.