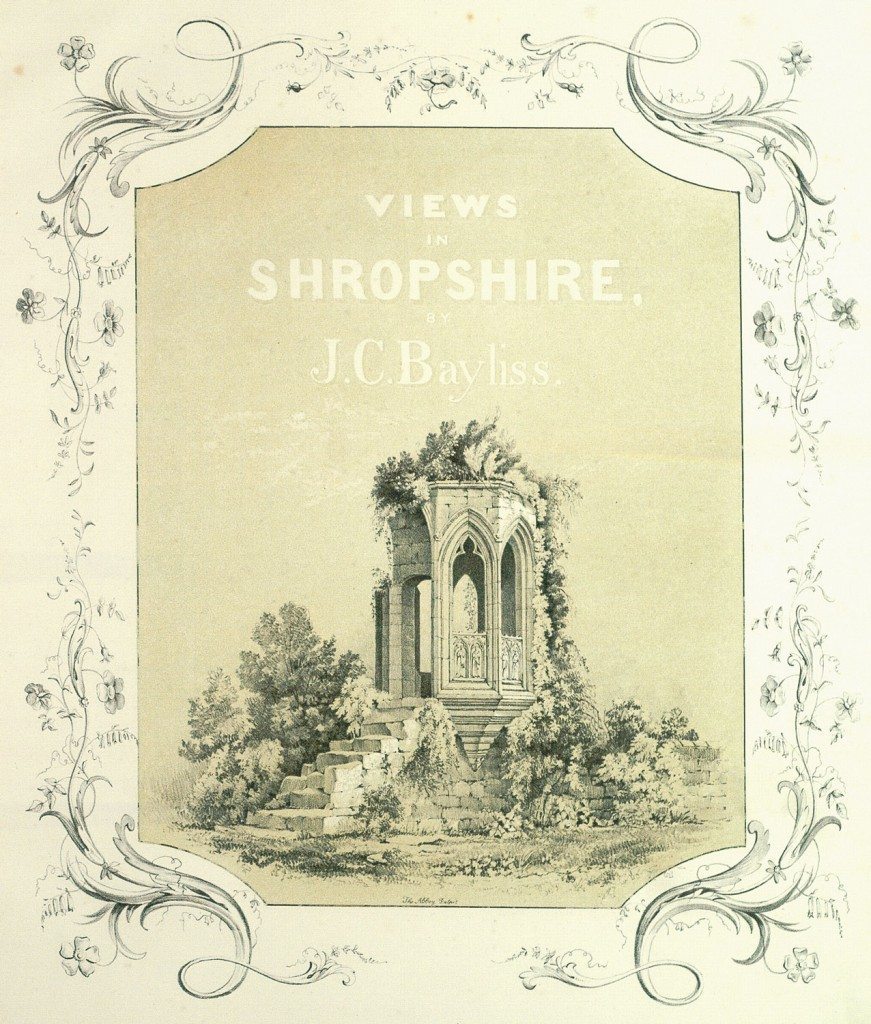 When the Rev J C Bayliss published his Views in Shropshire in 1839, the county contained one of the most important commercial and industrial areas in Britain. The Severn served as a liquid motorway moving goods from Shropshire’s hinterland to Stourport, Worcester, Gloucester and elsewhere. Coal and products made from iron and ceramics were transported from the Ironbridge Gorge by the extensive local canal network. By the 18th century tourists travelled to Shropshire to see the spectacular achievements of industry, not least, but not only the Iron Bridge which was completed by a consortium of local businessmen in 1779. The industrial hamlets on both sides of the Severn, Broseley, Coalbrookdale, Coalport, Jackfield and Madeley were less visually impressive but important centres for smelting ore into metal, casting iron, and creating china. Shrewsbury was a manufacturing town as well as the cultural and political hub of the county. Early 19th century maps and prints show foundries, breweries and textile factories etched into the landscape. The most striking example was and still is the massive flax mill at Ditherington, ancestor of the modern skyscraper, built by Charles Bage in 1796.

Views in Shropshire presented a different picture through engravings and accompanying text. Bayliss largely bypassed the industry and commerce of the county. Instead he concentrated on “the sublime and beautiful”, interpreted as the “rich scenic beauty” of the local landscape. He did not neglect buildings, but they were overwhelmingly ancient monuments: abbeys, castles and aristocratic seats. Ironbridge was an exception. Bayliss described the bridge, “admirable for its strength, lightness of effect and symmetry”, but he ignored the industrial and human context from which it was built. Adjectives and adverbs revealed his preferences: “lovely, magnificent, delightfully, melancholy, venerable, peaceful, pleasant, picturesque and pretty”, populated his pages.

Local inhabitants rarely intruded into Bayliss’s landscape. He described the kings, nobles and benefactors who shaped rural and urban Shropshire. Where other classes appeared they were adjuncts to the scenic. At Apley Park on the Severn, the “accompaniments” included “the fisherman paddling his silent way in his coracle” and “the whistle of the tired peasant in broken catches”. Bayliss was interested in the picturesque not people.

Several 18th century observers described the relationship between nature, industry, technology and human agency. They included the writer Erasmus Darwin, grandfather of Shrewsbury-born Charles Darwin, the painters Joseph Wright and Philip James de Loutherbourg, and Anna Seward, who visited Shropshire and wrote about the changing natural and industrial landscape in her perceptive poem Coalbrookdale. Thomas Harral’s Picturesque Views of the Severn, published only fourteen years before the Views and written for a similar audience provided a more varied experience of Shropshire than the later work. By the mid-19th century, many intellectuals turned their backs on industry and commerce and the apparently synonymous associations: greed, dirt, disease, exploitation and poverty. They focused instead on the rural landscape and the ancient past. The exhibition of the Rev Bayliss’s Views in Shropshire presents an example of this cultural trend, attractive but myopic.

Harral, Thomas, Picturesque Views of the Severn with Historical and Topographical Illustrations by Thomas Harral. The Embellishments from Designs by the late Samuel Ireland. vol.1 and vol. 2, (London, G and W B Whittaker, 1824). Jeremiah, Josephine, The River Severn: a Pictorial History from Shrewsbury to Gloucester (Chichester, Phillimore, 1998). Morris, Richard K, The Shropshire Severn (Shropshire Books, n.d.). Trinder, Barrie, “The most Extraordinary District in the World” Ironbridge and Coalbrookdale. An anthology of visitors’ impressions of Ironbridge, Coalbrookdale and the Shropshire coalfield, Second Edition, (Chichester, Phillimore, 1988). Trinder, Barrie, The Industrial Revolution in Shropshire, third edition (Chichester, Phillimore, 2000).