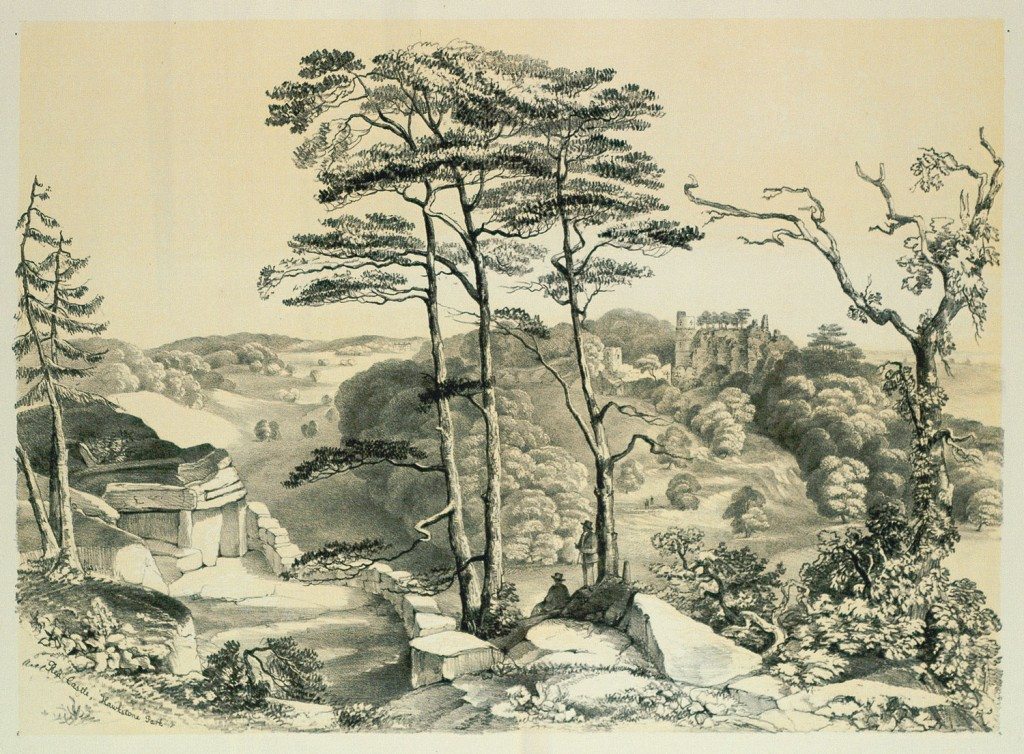 THIS relic of feudal grandeur and insecurity, now adorns a landscape which nature alone has made eminently beautiful. The place is mentioned by CAMDEN as “coming into the family of the AUDLEYS by the bounty of MAUD, THE STRANGER, or LE STRANGE, and that it was called Castle Rous, or Red, from the redness of the stone with which is was built.” Being granted by the AUDLEYS to the CORBETS, of Moreton Corbet castle, they were the lords of the manor of Red Castle, till of late years, when SIR ANDREW CORBET, father of the present baronet, made with SIR JOHN HILL, the grandfather of VISCOUNT HILL, among other exchanges of property, one for the manor of Red Castle.

It is situated in the park of Hawkstone, on a detached precipitous rock, and mingling with the other charms of the place, adds that of antiquity to the number. The Castle was built in the reign of HENRY the Third, AD 1232, upon the site of a more ancient one. In 1539 it was in ruins, but afterwards rebuilt. In the civil wars that immediately preceded the commonwealth, when it was inhabited by ROWLAND HILL, ESQ it was attacked by the parliament army, pillaged, and demolished; himself finding refuge in a secluded glen in the park, where an urn, containing an inscription to this purport, has been erected.

The present drawing is taken from the rock opposite the Castle, an elevated spot, on which the fury of the wintry blast has left its track in the upturned roots of great trees bleaching in the sun; numberless pines, however, with their bleak stems and dark heads still crown the summit, and aged oaks springing from rocks in every fantastic form, extend their gnarled arms in picturesque and luxuriant wildness over the ravines below.

On the left of the foreground is the exit from the druid’s cave, one of the many adaptations of this wonderful scenery to the purposes of interest and amusement.

The building in the distance is the citadel.

From an adjoining hill, on which is a column and statue erected to the memory of SIR ROWLAND HILL (who in 1550 was the first protestant lord mayor of London), the view is so extensive that the eye ranges over an area in which thirteen counties are distinguished. Scarce a mile hence is a spot, where tradition states a city stood, called Bury, famous in king ARTHUR’S days.