Home·Browse·Practical Thoughts on Amputations: 2. Amputation of the Thigh and After Treatment 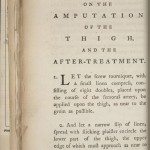 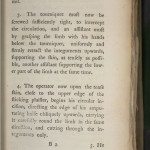 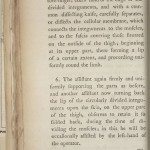 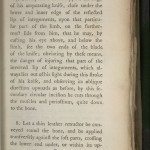 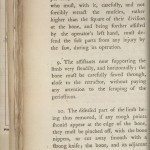 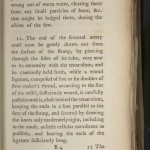 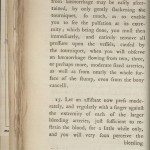 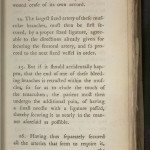 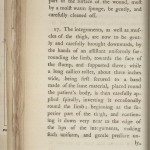 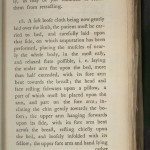 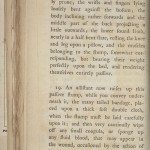 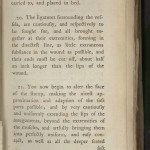 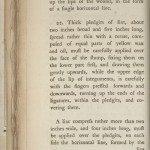 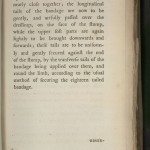 Practical Thoughts on Amputations: 2. Amputation of the Thigh and After Treatment

ON THE AMPUTATION OF THE THIGH AND THE AFTER-TREATMENT

1. Let the screw tourniquet, with a small linen compress, consisting of eight doubles, placed upon the course of the femoral artery, be applied upon the thigh, as near to the groin as possible.

2. And let a narrow slip of linen spread with sticking plaister encircle the lower part of the thigh, the upper edge of which must approach as near to

the diseased part, as prudence will admit.

3. The tourniquet must now be screwed sufficiently tight, to intercept the circulation, and an assistant must by grasping the limb with his hands below the tourniquet, uniformly and firmly retract the integuments upwards, supporting the skin as tensely as possible, another assistant supporting the lower part of the limb at the same time.

4. The operator now upon the tense skin, close to the upper edge of the sticking plaister, begins his circular incision, directing the edge of his amputating knife obliquely upwards, carrying it carefully round the limb in the same direction, and cutting through the integuments only.

5. He then with his left thumb and fore-finger, takes hold of the edge of the divided integuments, and with a common dissecting knife, carefully separates, or dissects the cellular membrane, which connects the integuments to the muscles, and to the fascia covering those situated on the outside of the thigh; beginning at its upper part, there forming a lip of a certain extent, and proceeding uniformly round the limb.

6. The assistant again firmly and uniformly supporting the parts as before, and another assistant now turning back the lip of the circularly divided integuments upon the skin, on the upper part of the thigh, observes to retain it so folded back, during the time of dividing the muscles; in this he will be occasionally assisted by the left-hand of the operator.

7. The operator now reapplies the edge of his amputating knife, close under the lower and inner edge of the reflected lip of integuments, upon that particular part of the limb, on the furthermost side from him, that he may, by casting his eye above, and below the limb, see the two ends of the blade of the knife; obviating by these means, the danger of injuring that part of the inverted lip of integuments, which always lies out of his sight during this stroke of his knife, and observing its oblique direction upwards as before, by this secondary circular incision he cuts through the muscles and periostium, quite down to the bone.

8. Let a thin leather retractor be conveyed round the bone, and be applied transversely against the soft parts, crossing the lower end under, or within its upper

end, then deliver it to the assistant, who must, with it, carefully, and not forcibly retract the muscles, rather higher than the square of their division at the bone, and being further assisted by the operator’s left hand, must defend the soft parts form any injury by the saw, during its operation.

9. The assistants now supporting the limb very steadily, and horizontally; the bone must be carefully sawed through, close to the retractor, without paying any attention to the scraping of the periostium.

10. The diseased part of the limb being thus removed, if any rough points, should appear at the edge of the bone, they must be pinched off, with the bone nippers, or cut away smooth with a strong knife; the bone, and its adjacent

parts must then be wiped with a sponge wrung out of warm water, clearing them from any small particles of bone, &c. that might be lodged there, during the action of the saw.

11. The end of the femoral artery must now be gently drawn out from the surface of the stump, by piercing through the sides of its tube, very near to its extremity with the tenaculum, and be cautiously held forth, while a round ligature, composed of five or six doubles of shoe-maker’s thread, according to the size of the vessel, sufficiently waxed, is carefully passed round it, close behind the tenaculum, keeping the ends in a line parallel to the face of the stump, and secured by drawing the knots only moderately tight, including in the noose, as little cellular membrane as possible, and leaving the ends of the ligature sufficiently long.

12. The perfect security of this vessel from haemorrhage may be easily ascertained, by only gently slackening the tourniquet, so much, as to enable you to see the pulsation at its extremity; which being done, you must then immediately, and entirely remove all pressure upon the vessels, caused by the tourniquet, when you will observe an haemorrhage flowing from two, three, or perhaps more, moderate sized arteries, as well as from nearly the whole surface of the stump, even from the bony cancelli.

13. Let an assistant now press moderately, and regularly with a finger against the extremity of each of the larger bleeding arteries, just sufficient to restrain the blood, for a little while only, and you will very soon perceive the

bleeding from the other parts of the wound cease of its own accord.

14. The largest sized artery of these muscular branches, must then be first secured by a proper sized ligature, agreeable to the direction already given for securing the femoral artery, and so proceed to the next sized vessel in order.

15. But if it should accidentally happen, that the end of one of these bleeding branches is retracted within the muscles, so far as to elude the touch of the tenaculum; the patient must then undergo the additional pain, of having a small needle with a ligature passed, thereby securing it as nearly in the manner aforesaid as possible.

16. Having thus separately secured all the arteries that seem to require it,

the grumous blood lodging upon any part of the surface of the wound, must by a moist warm sponge, be gently, and carefully cleaned off.

17. The integuments, as well as muscles of the thigh, are now to be gently and carefully brought downwards, by the hands of an assistant uniformly surrounding the limb, towards the face of the stump, and supported there; while a long calico roller, about three inches wide, being first secured to a band made of the same material, placed round the patient’s body, is then carefully applied spirally, inverting it occasionally round the limb; beginning at the superior part of the thigh, and continuing it down very near to the edge of the lips of the integuments, making such uniform, and gentle pressure only,

as may be just sufficient to retain them from retracting.

18. A soft loose cloth being now gently laid over the limb, the patient must be carried to bed, and carefully laid upon that side, on which amputation has been performed, placing the muscles of nearly the whole body, in the most easy and relaxed state possible, i.e. laying the under arm flat upon the bed, more than half extended, with its fore arm bend towards the breast; the head and face resting sideways upon a pillow, a part of which must be placed upon the arm, and part on the fore arm; inclining the chin gently towards the bosom; the upper arm hanging forwards upon its side, with its fore arm bent across the breast, resting chiefly upon the bed, and loosely infolded with its fellow; the upper fore arm and hand lying

rather supine, and the under ones nearly prone; the wrists and fingers lying loosely bent against the bosom; the body inclining rather forwards and the middle part of the back projecting a little outwards; the lower found limb, nearly in a half bent state, resting the knee and leg upon a pillow, and the muscles belonging to the stump, somewhat corresponding, but bearing their weight perfectly upon the bed and rendering themselves entirely passive.

19. An assistant now raises up this passive stump, while you convey underneath it, the many tailed bandage, placed upon a thick soft double cloth, when the stump must be laid carefully upon it; and then very cautiously wipe off any small coagula, or sponge up any fluid blood, that may appear in the wound occasioned by the action of

muscles, &c. while the patient was carried to, and placed in bed.

20. The ligatures surrounding the vessels, are cautiously, and respectively to be fought for, and all brought together at their extremities, forming in the directest line, as little extraneous substance in the wound as possible, and their ends must be cut off, about half an inch longer than the lips of the wound.

21. You now begin to alter the face of the stump, making the nicest approximation and adaption of the soft parts possible; and by very cautiously and uniformly extending the lips of the integuments, beyond the extremities of the muscles, and artfully bringing them into perfectly uniform, and easy contact, as well as all the deeper seated

soft parts, as much as possible, close up the lips of the wound, in the form of a single horizontal line.

22. Thick pledgits of lint, about two inches broad and five inches long, spread rather thin with a cerate, composed of equal parts of yellow wax and oil, must be carefully applied over the face of the stump, fixing them on the lower part first, and drawing them gently upwards, while the upper edge of the lip integuments, is carefully with the fingers pressed forwards and downwards, turning up the ends of the ligatures, within the pledgits, and covering them.

A lint compress rather more than two inches wide, and four inches long, must be applied over the pledgits, on each side the horizontal line, formed by the lips

lips of the wound, placing their edges nearly close together; the longitudinal tails of the bandage are now to be gently, and artfully passed over the dressings, on the face of the stump, while the upper soft parts are again lightly to be brought downwards and forwards; these tails are to be uniformly and gently secured against the end of the stump, by the transverse tails of the bandage being applied over them, and round the limb, according to the usual method of securing the eighteen tailed bandage.

Illustration of position patients should lie in after surgery.