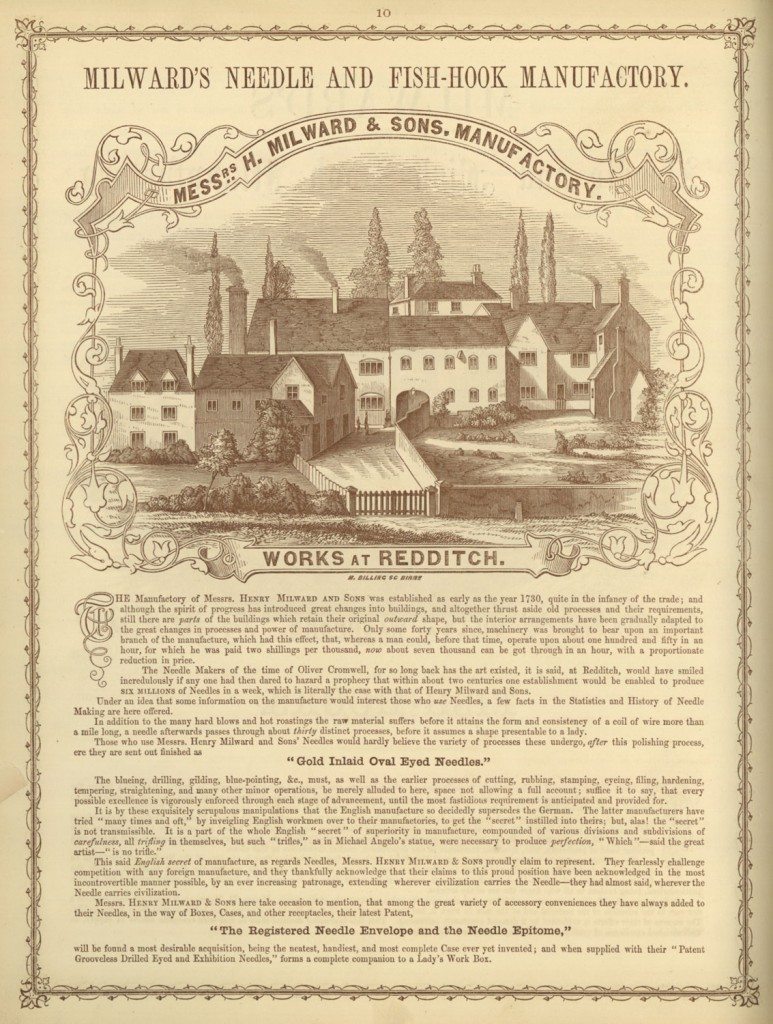 Is a process of much more complex description. We shall, however, describe it very briefly, as a minute enumeration of its details would only perplex the reader, a statement which will be readily admitted, when we mention that simple as the needle appears to be, it actually passes through the hands of not fewer than one hundred and twenty different operatives before it is ready to be offered to the public for sale. The steel wire is sorted, cleansed and straightened. It is then cut out into lengths and pointed by pressure against a grindstone, an employment most injurious to the health of the workman, who constantly inhale particles of steel and thus contract peculiar and fatal forms of pulmonary disease. After grinding, the heads are flattened and the eyes punched – sometimes by hand but generally by machinery. The needles are then cleaned to remove all roughness and the eyes are smoothed by filing; they are next again straightened, then hardened in an oven, then tempered by being thrown into water or oil, again straightened to correct the distortion which occurs during hardening, then scoured, a process performed by machinery and lasting about forty-eight hours. They are next winnowed, to free them from the scouring or grinding powders. Sorting into sizes and qualities follows and this is succeeded by blueing and polishing, the last stage of the manufacture. Needle making was introduced into England by Elias Crowse, a German, about the eighth year of Queen Elizabeth’s reign. It is carried on in several parts of the kingdom and amongst others at Birmingham, but principally at Redditch, a village about fourteen miles from Birmingham. Mr Charles Knight in his interesting work “The Land we Live in”, speaks as follows of this great seat of the needle trade:- “The village of Redditch, in Worcestershire, one of the most extraordinary villages of England, is the home of the needle trade; almost every manufacturer makes needles, almost every workman makes needles; almost every lawyer and doctor, every landlord and housekeeper, every shopkeeper and peddler, makes his money indirectly by needles or needle-makers; needles are the beginning and the end, the be-all and do-all, the sinews and the life-blood of Redditch. Three or four thousand millions of needles travel out of this needle-making Redditch every year. No wonder then, if Birmingham has to be content with the second place in this department of industry.”