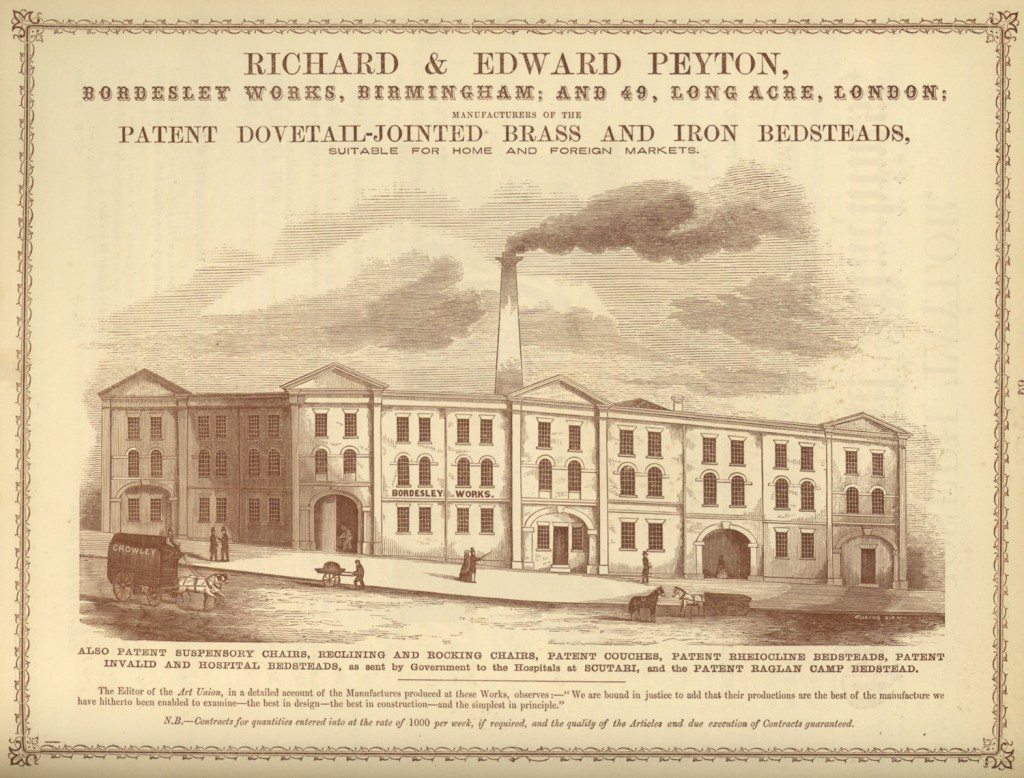 Text: Taken from the original Directory

acew branches of manufacture have been more rapidly developed within a comparatively short space of time than the trade of making metallic bedsteads. Thirty years ago the production of these articles was limited to one or two unimportant establishments, which produced combinations of brass and iron clumsily made, hideous in form, awkwardly fitted together, difficult to take down or put up and when erected cumbrous and shaky from the parts being attached together by numerous screws and bolts and heavy pieces of cast or forged iron. These metallic erections, be courtesy called bedsteads, present a striking contrast with the light and elegant articles of furniture which now bear that designation. The improvements in the manufacture of iron, the use of ingenious machinery in making the various parts of bedsteads and the number of skilled workmen engaged in the trade, have resulted in the production of articles of furniture cheaper, more useful, because more readily moved and fitted, cleaner and more elegant than similar articles made of wood. Various manufacturers have from time to time introduced numerous improvements into the processes of bedstead making. Amongst these may be mentioned the dovetail joints, patented by Messrs. Peyton and Harlow; the continuous taper pillar, patented by Mr Winfield; the casting of various parts together and the rolling into shape by the ironmaster of the angle iron, which forms the sides. The manufacture is conducted to a great extent by the aid of machinery. The iron for the sides having been cut into the required lengths, is by a machine perforated with holes to admit the laths which form the sacking and which are also cut into their proper lengths by machinery. The solid dovetail joints into which the sides and end of the bedsteads fit are cast with such accuracy that no difficulty is experienced in uniting them with the other portions of the framework. The common bedsteads, which form the staple of the trade, have solid pillars made of iron rods and are usually painted with some plain colour. In the better kinds the pillars are made of tubes tapering towards the top and highly decorated by japanning and painting. Bedsteads of brass are still make in great numbers and in these the skill of the modeller is called into operation to produce the required degree of ornament. The finest bedstead hitherto made of this description was that produced by Messrs. Winfield and Son, Cambridge Street Works, for the Great Exhibition of 1851, at a cost of nearly £500. Brass bedsteads can be made from about £6 and upwards. The pillars of brass bedsteads are usually strengthened by a rod of iron running up the centre of the tube. The brass ornaments are cast, as already under the head of brass foundry and are finished by being turned, filed and dipped: they are also lacquered and burnished. The bedstead manufacture employs a large number of hands and is every year increasing in importance.