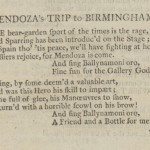 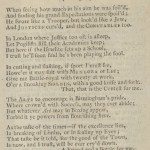 From: The Political Songster by John Freeth

SINCE bear-garden sport of the times is the rage,
And Sparring has been introduc’d on the Stage;
With Spain tho’ ‘tis peace, we’ll have fighting at home,
Ye Colliers rejoice, for Mendoza is come.
And sing Ballynamoni oro,
Fine fun for the Gallery Gods.

In Boxing, by some deem’d a valuable art,
So fond was this Hero his skill to impart;
He came full of glee, his Manœuvres to show,
But return’d with a horrible scowl on his brow!
And sing Ballynamoni oro,
A Friend and a bottle for me.

When seeing how much in his aim he was foil’d,
And finding his grand Expectations were spoil’d;
He swore like a Trooper, but look’d like a Jew,
And JUSTICES curs’d, and the CONSTABLES too.

In London where Justice too oft is asleep,
Let Pugilists still their Academies keep;
But here if the Israelite sets up a School,
I trust he’ll soon find he’s been playing the fool.

In cutting and slashing, if sport I must see,
Howe’er it may suit with MENDOZA or LEE;
Give me Battle-royal with twenty at work,
O’er a smoaking SIRLOIN, with a good knife and fork.
That, that is the Contest for me.

The ARTS to encourage is Birmingham’s pride,
Where crown’d with Success, may they ever abide;
But whatever Art may in Boxing appear,
Forbid it ye powers from flourishing here.

As the taste of the times – if the excellence lies,
In breaking of Limbs, or in sealing up Eyes;
That taste be it told, for the good of the Town,
Is now, and I trust, will be ever cry’d down.
A Friend and a Bottle for me.