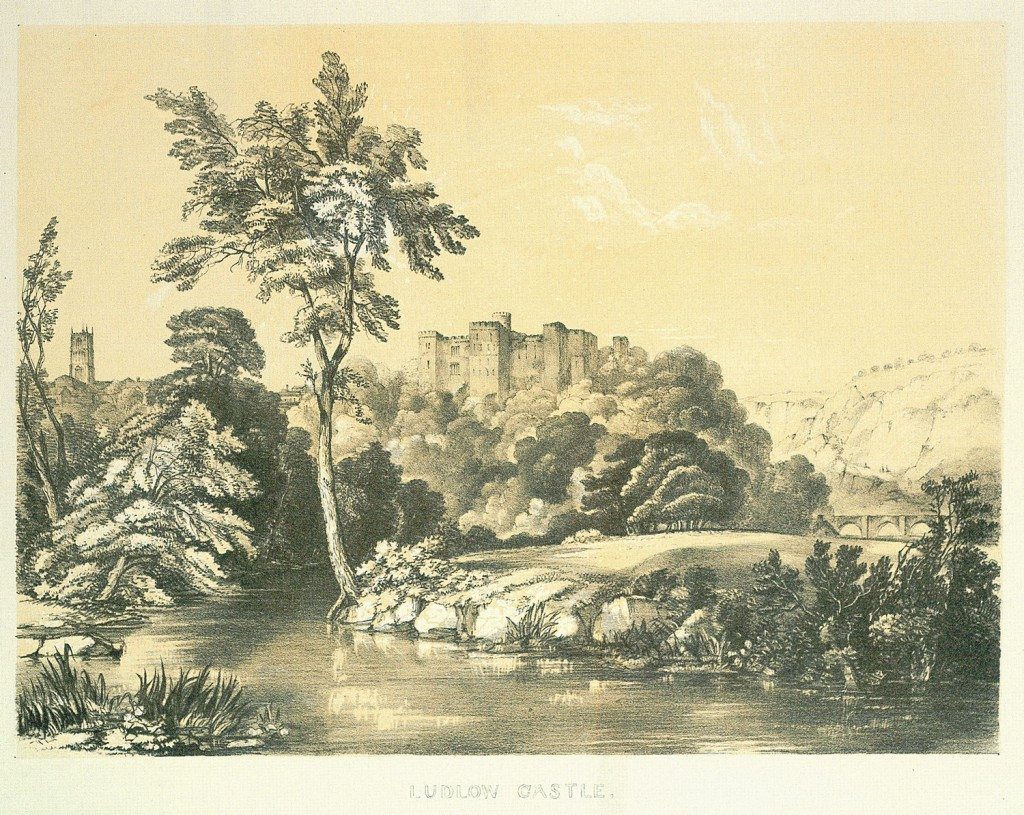 The town of LUDLOW is situated on a hill, its streets sloping downwards on every side. Half round the town it is washed by a river broken into waterfalls, with mills on its stream, which is crossed by two stone bridges. A hill called Whitcliff Hill, which is seen on the right side of the drawing, rises abruptly on the opposite side of the river, and is ascended by winding paths on its side; a walk along its summit on the edge of the precipice, affords very great delight, giving a complete view of the town with an extensive distance.

The Castle, however, is the principle charm of this celebrated and distinguished town, being the remains of a once princely mansion, where men of high renown have lived, and actions, on which have centered the balance of kingdoms, have been transacted. It stands on a precipitous rock one hundred feet in height, on the bank of the Teme, and commands a view over the vale of Corve, through which the river winds its circuitous way amidst every kind of rural scenery: the horizon is broken by distant mountains.

It is believed that the Castle was built by ROGER DE MONTGOMERY, who built so many others in this County, possessing nearly the whole of it, soon after the conquest: it did not remain in his family long, for it passed from his grandson on account of his rebellion. In STEPHEN’S reign it endured a siege, conducted by the King, who was accompanied by the young Prince of Scotland. One day the young Prince, approaching too near, was caught by a grappling-iron thrown from the walls, and would have been taken had not the King rushed forward, cut the rope, and rescued him at the risk of his own life. The Castle afterwards passed through the hands of several noble families, till, in 1451, we find it in the possession of the aspiring RICHARD, Duke of York, who, with other lords, was planning a change in the government, and a restoration of the crown to his own family; on the approach of HENRY’S army, however, his lords deserted him, and he was compelled to flee, leaving the town and Castle to become the scenes of spoilage and plunder. RICHARD ultimately perished in his plots; but his son, afterwards EDWARD the Fourth, was more fortunate, obtaining the crown, though not without the shedding of innocent blood. At the conclusion of his reign, the young King, EDWARD the Fifth, with his brother, was residing at Ludlow Castle, having been sent thither that his presence might check the rebellious spirit of the Welsh, and restore the tranquility which had been so much disturbed. After the death of their father they were conveyed to London, and by the command of their Uncle, RICHARD the Third, murdered in the tower.

In 1501 Prince Arthur, eldest son of HENRY the Seventh, held a court of great splendour at Ludlow, on his marriage with CATHERINE of Arragon, afterwards wife of HENRY the Eighth, and mother of Queen MARY. A few months after his marriage he died in his Castle.

In the succeeding reigns of HENRY the Eighth, MARY, and ELIZABETH, Ludlow Castle saw its most glorious days, during the existence of the Court of the Marches, the Lord President residing and holding courts there; but at the extinction of that court in the reign of WILLIAM and MARY, 1689, its glory departed, its stately rooms were deserted, and it has since been suffered to go to decay.

This once magnificent Castle is now a ruin – a shell of what it has been; the life gone from it, and its walls, though hard as the rock on which it stands, are fast crumbling away, adding another victim to the thousands already engraven on the roll of time.