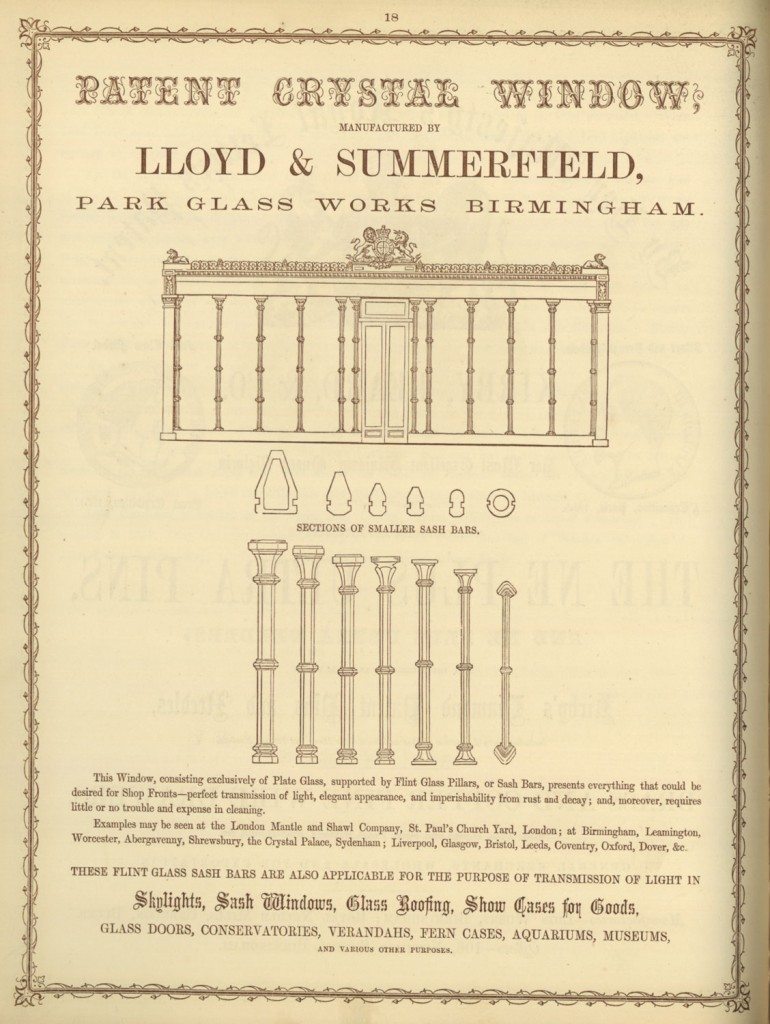 Glass made in furnaces, each containing from six to eight ‘pots’, or crucibles, made of Stourbridge clay. These pots rest upon a bed of masonry, in the midst of which is placed a fire. The whole are enclosed in a cone open at the top and having in its sides arches opposite to the pots. When the materials above described are thoroughly mixed we will suppose that the process of making Crown Glass is commenced. A workman selects a hollow iron tube, one end of which he dips into the fused mass, or ‘metal’ as it is called. He blows down the tube and then rolls the gathered metal on an iron table until it has acquired something like the shape of a pear. He next exposes it again to the action of a furnace and by repeated blowing, rolling and heating, the soft mass becomes like a globe with a tubular neck. Another workman now applies to a projection, or nipple at the lower end of the globe, a solid iron rod, tipped with melted glass, which attaches the rod to the nipple. The tubular neck being touched with a tool and dipped into water, the globe becomes detached from the hollow rod used by the first workman. The second operator carries it to a furnace and by regular rotation slowly heats the thick projecting remains of the former neck, thus causing it to open it slowly out. He next hands the glass to the ‘flasher’ who again places it in a furnace and resting the iron rod upon a hook fixed in the wall, causes it to revolve with surprising rapidity until the glass assumes the shape of a flat sheet, or table, with a thick boss in the centre. The ‘flasher’ then removes the sheet from the furnace and when it is cool enough lays it down on a bed of sand, where an assistant, with a pair of shears or a touch of cold iron, detaches it from the rod. The table or sheet, is then by the help of an iron fork, placed in the annealing oven and after being kept there for twenty-four hours, at a temperature varying from 6000 to 1000 Fahrenheit, it is removed to be cut up into window glass. The thick boss in the centre forms those panes which are vulgarly known by the name of “bulls’ eyes”.