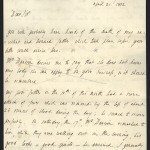 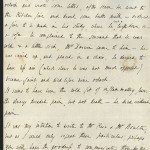 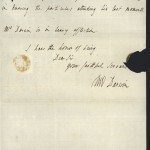 Darwin’s son, Robert writes to Watt about the death of his father.

You will probably have heard of the death of my excellent and honored father, which took place before your letter could arrive here.

Mrs Darwin desires me to say that she does not know any body she can apply to on your business, or it should be remembered.

My poor father on the 10th of this month had a severe attack of fever which was removed by the loss of about 25 ounces of blood during the day; he seemed to recover perfectly. On Saturday the 17th, Mrs Darwin remarked to him, while they were walking out in the evening, his good looks & good spirits – he answered, I generally look well before I become ill. On Sunday morning (18th) he came down stairs at six oclock and wrote some letters, after seven he went to the kitchen fire and drank some butter milk – ordered a fire to be made in his study, where he but laid down on a sofa. He complained to the servant that he was cold & a little sick, Mrs Darwin came to him – he was raised up, and placed in a chair, he desired to have less air (which shows he was not much oppressed[?] ) became faint and died before nine oclock.

It seems to have been the cold fit of inflammatory fever. He always dreaded pain, but not death – he died without pain.

It was my intention to write to Mr Keir & Mr Boulton, but as I could only repeat these particulars, perhaps you will have the goodness to communicate them for me. My father had great friendship and esteem for each of you and I therefore think you would be interested in knowing the particulars attending his last moments.

Mrs Darwin is in heavy affliction.

I have the honor of being