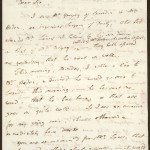 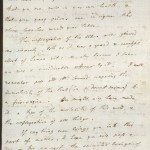 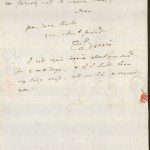 Darwin writes to assure Boulton of the care being taken of a servant of Boulton’s, Mr Laws. He also commiserates with Boulton over the loss of the Albion Mill in London, which was powered by a Boulton and Watt engine and destroyed by fire in March 1791.

I saw Mr Gregory of Spondon and Mr Haden, and ingenious Surgeon of Derby, who had attended Mr Laws I believe by his own desire, or that of Mr Gregory, instead of Mr Fowler, who saw him at first – they both assured me yesterday that he went on well.

This morning, Monday, I wrote a line to Mr Haden, and desired he would go over to Spondon this morning. He has sent me word, that he has been, and that all goes on quite well. So I see no occasion for my going over, should otherwise immediately have done so.

You are so concern’d for Mr Laws, that you have said nothing about yourself – it would have been very agreable to me to have heard that you are well in your own health; and that your young scions are in vigour like olive branches around your table.

The conflagration of the Albion mills grieved me sincerely, both as it was a grand and successful effort of human art; and also because I fear you was a considerable sufferer by it. I well remember poor old Mr Seward comparing the immortality of the Soul (in a devout sermon) to a fire-engine. He might now have made it a type of mortality of this world, and the conflagration of all things.

If any thing ever brings you into this part of matter, I hope you will pass a day or two amongst the animated being of this country. I dare say neither yourself nor myself have changed many of our opinions, since we formerly used to compare them.

I will again inquire about your serv[ant] in 2 or 3 days, and if I should hear any thing amiss, will see him, and acquaint you.