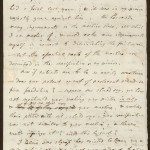 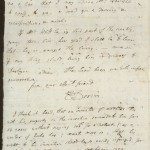 Darwin writes to Boulton about Richard Arkwright’s difficulties over patents for his machinery.

I was desired lately to look at the specification of Mr Arkwright’s patent, about which He had a trial last year; and it was in my opinion unjustly given against him. He has made many improvements in the machine since, all which I am master of, and could make more improvements myself in respect to diminishing the friction etc – but the essential parts of the machine are described in the specification in my opinion.

Now if patents are to be so easily overthrown – does your patent or act of parlament stand on firm foundation? – Suppose one should say, you have not mention’d you working your piston in oil; and if any one should copy your machine, and working their piston with oil, should say, your specification was not similar to your machine; and therefore would infringe it? Would this be just?

I believe some shyness has existed between you and Mr Arkwright, but is it not your interest to assist him with your evidence on his trial? which also may make good humour between you, and you make fire-engines for cotton-works in future; which I understand from spinning wool also, will increase tenfold.

If yourself or Mr Watt think as I do on this affair, and that your own interest is much concern’d in establishing the operation of patents, pray give me a line that I may advise Mr Arkwright to apply to you, and send you a drawing and specification and model.

If Mr Watt be in this part of the country, pray tell him, how glad I shall be to hear that he is amongst the living – more so if any thing should bring him or yourself to Derby.

Adieu, the Lord keep both of you in fine preservation,

From your affect. friend

I think it hard, that an inventor of machines has not his property in the invention secured to him for 14 years without paying 100£ for a patent; as a writer of books has; much more so, that his right to his invention should be so easily infringed for want of an intelligent or mechanical jury.

Tho’ you inventions, by draining Cornwal, have supply’d work to ten thousands – Mr Arkwright has employ’d his thousands – I think you should defend each other from the ingratitude of mankind. His case comes on the 14th of February, [so] that the time is urgent, pray let me soon hear from yourself or Mr Watt on this affair.