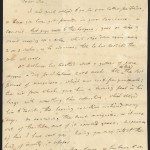 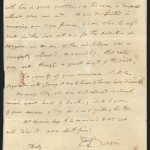 Darwin writes to Watt about one of the various law suits over the patents of Watt’s steam engines and the use Darwin continued to make of gases to treat patients. Watt was acting as a supplier of the apparatus to make the gases.

I was much obliged to you for your letter from London, and hope you have got forwards in your law-cause. A law-suit, that pays well to the Lawyers, goes on like a snail creeping up a pole, which slips down again every 2 or 3 inches, as he advances, till he has beslimed the pole all over.

Mr Walhouse has breathed about 7 gallons of pure oxygene a day for I believe 2 or 3 weeks, till He tried the last parcel of manganese, which was sent from your people; the air from which gave him a burning feel in his lungs with something like suffocation, which obliged him to desist, the burning sensation continued many days. On examining the burnt manganese, as it came out of the tube, part of it appeared green. A specimen of this I have sent you, hoping you may detect the kind of impurity it possesses.

Mr Walhouse has an Hydro-thorax, and has been 6 or 7 times emptied by foxglove. The oxygene seem’d of no avail. I am now thinking of trying Hydro-carbonate with him in small quantities; as his case is desperate without some new aid. He was disappointed in receiving your large furnace etc etc when he only sent for the iron pot etc for the production of oxygene. And one of the air-holders was so imperfectly solder’d, and varnish’d, that water run out through a great length of the joints.

This impurity of your manganese should be inquired into; hoping it may be known by the eye before it is pounded.

One young lady, who was much reduced in strength, recieved great benefit by breathing about 6 gallons of pure oxygene a day for 2 or 3 weeks in this town.

Mrs Darwin begs to be remember’d to Mrs Watt, with dear Sir, your affect. friend