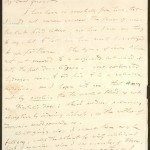 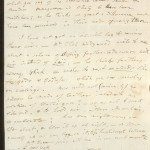 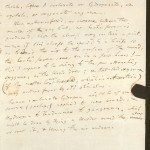 Darwin writes to Watt concerning their experiments into the use of gases in medicine. Darwin also mention Thomas Wedgwood, the son of Josiah, and his notion of an air-bed.

I have been so perpetually from home, that I could not sooner answer the favor of your two last kind letters, nor have I now any thing to say, but to tell you how much I am obliged to you for them. The Hymen of iron I have not yet procured to be perforated but intend it with the first days leisure. Your carbonated hydrogen seems to bid fair to be a valuable medicine, and I hope with you, that it may act by purpling the too scarlet blood, and not as Digitalis does; which produces pulmonary absorption by inducing sickness, as the author of Zoonomia would persuade us.

About giving airs I suspect there may be fallacy, unless the patient be nicely watch’d. – I think I remember, when I was a smoaker of tobacco, that I only drew the smoke into my mouth, as I never could puff it out at my nose, and therefore it did not pass into my lungs.

I shall wait for Dr Beddoes’ next book, I think, before I carbonate or hydrogenate, or azotate, or oxygenate any one.

When matter is form’d, as suppose between the muscles of any limb, no hectic fever is produced, tho’ the abscess may contain a pint. – Now if this absess be open’d by a knife so as to admit the air to the surface of the wound, the hectic fever comes on in a few hours! – this I suppose to be owing to the pus attracting oxygene, as the blood does; and that this oxygene (if the matter be ever absorbed, which is not certain) may produce fever by its stimulus, hence carbonate hydrogen might be of great service (perhaps) applied to some wounds, and Hydrogen to tendencies to gangreen, which might be done by tying a bladder round the ulcer or over it, and blowing the air under.

Mr Strutt, who bleaches here with manganese, thinks what you say of the difference between Exeter and Mendip manganese is likely to have been mistaken; as he thinks so great a difference must have been percieved in their mode of using them.

I have not got an oil-silk bag to recieve these airs – Mr Thos. Wedgwood wrote to me about a scheme of stuffing feather-bed-covers with air instead of hair, – he thinks feathers always stink, and wishes to rest on clouds like the Gods and Goddesses, which you see sprawling on cielings. Now could not (seriously) a pillow be made of leather imbued with a solution of Elastic gum? – so as not to smell like oil, and to hold air, either atmospheric or carbonate? Thus one might carry one’s bed about, and blow it up at night – or blow yourself up as you lye on it, like the philosoph bellows.

Mrs Darwin joins with me in our most respectful compliments to Mrs Watt,