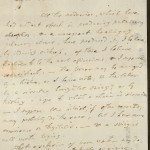 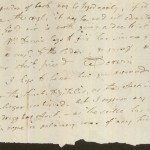 Darwin’s advice to Watt for the continued treatment of Jessy.

All the medecines, which have had evident effect in producing pulmonary absorption, and a consequent healing of pulmonary ulcers, have produced it, I believe, by inducing sickness, of these I believe foxglove to be the most efficacious, I suppose sea-sickness. – The former may be managed by a tincture, as I before wrote, and the latter by a circular horizontal swing, as by twisting a rope to which a chair is suspended.

– I suppose blue vitriol, if often repeated, may probably do the same, but I have more experience on Digitalis – and a swing is well worth trying.

What a suffusion of warm water may do, I should doubt, it seems too feeble an engine.”

The powder of bark may be tryed easily; if it does not increase the cough, it may be used with advantage – and the fix’d air is worth giving a due trial to.

Mrs Darwin begs to give her sincere good wishes and compliments to the ladies, and yourself, and I am your affect. friend

I hope to hear how you proceed. I prefer the tinct. Digitalis, as the effect is so much longer continued. But I suppose any sickness drugg has effect – as the scilla has been so long in vogue in pulmonary cases of many kinds.