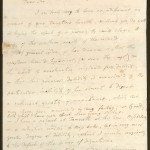 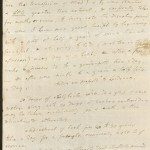 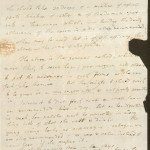 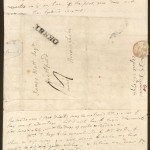 Darwin writes to Watt with more suggestions for the treatment of his daughter, Jessy, including advice on her diet.

I am truly sorry to hear so indifferent an account of your daughter’s health, and think you do well in trying the effect of a journey by small stages to any of the southern coasts of the island.

My general idea of her disease is that the symptoms term’d hysterical (and even the cough) and the want of menstruation originate from debility and that this general debility is occasion’d by the particular inability of her stomach to digest a sufficient quantity of nourishment, which last may have been occasion’d by long fasting, or by cold; both which I have seen affect other young ladies.

– I have a patient at Tamworth at this time, Miss Wilson, in a situation similar to Miss Watt’s, but in very much greater degree of debility, which I ascribe originally to the defect of the power of digestion.

The principal thing, which can be done in these cases, (as our science of medecine is not forward enough to use the transfusion of blood) is by some stimulus a little greater than natural, and uniformly taken for months or years, to invigorate the digestive power. In some I have seen a great benefit by beginning with a pill of half a grain of opium taken at breakfast, and at going to bed (or in tea in the afternoon) every day as a habit; and after a few weeks to increase it to a grain-pill twice a day – and after some months to a grain and a half twice a day. Pills are prefer’d to Laudanum.

30 drops of chalybeate wine in a glass of warm water along with 20 drops of tinctura cantharidum may be taken occasionally for a month, and then discontinued alternately.

And extract of bark from 20 to 30 grains twice day for a fortnight occasionally might be of service.

One stool daily or alternate days should be produced by rhubarb or by aloe. When her fits come on, or threaten to come on, she should take 30 drops of a mixture of equal parts tincture of castor and of laudanum, put into a two-ounce phial – besides the daily allowance of the opium in pills above recommended – ether may be used but is of less efficacy than the above – the same of assafoetida.

The above is the general method, which is most likely to serve her; your surgeon will please to put the medecines in such forms as she can best take them. But the opiate I should wish to be given in a very small pill and uniformly persisted in.

In respect of diet, flesh-meat and small beer are recommended twice a day, but as her digestion is weak, her palate must be consulted in every thing both of what she eats and drinks. The young spring herbs, as asparagus, cabages, etc are also recommended; and wine and water instead of small beer, if she prefers it.

She should go quite loose in her stays and should lie down after dinner for an hour if it be agreable to her – and go to bed early. The drops of tincture of castor and laudanum must be repeated in _ an hour, if the first dose does not remove the hysteric spasms.

The medecines I last directed may be continued till you see if they are of advantage, but I wish her to begin the opiate pill immediately – and the drops of castor and laudanum.

Mrs D begs to be remember’d to Mrs Watt, to whom and Miss Jessey you will please to make my best compliments, and sincere good wishes, and believe me, dear Sir,