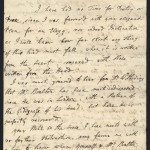 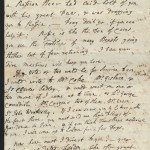 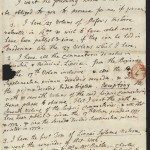 Boulton and Watt were now in partnership and Boulton was attempting to have a Private Bill passed in Parliament to extend the patent for Watt’s steam engine. Darwin’s letter also refers to Dr William Small’s death and the possibility of writing an elegy to him and the recent offer Watt received to work in Russia, which he seriously considered but eventually turned down and remained in partnership with Boulton.

I have had no Time for Poetry or Prose, since I was favour’d with your elegant Plan for an Elegy, nor indeed Inclination, as I well know how far short any thing of this kind must fall, when it is written from the Heart, compared with those written from the Head.

I was much grieved to hear from Dr Withering that Mr Boulton has been much indisposed since He was in London, with a Return of the Giddyness of his Head, but hope He is perfectly recover’d.

Your Bill in the House I hope meets with no further Obstruction, pray favour me with a Line to know when yourself and Mr Boulton intend, or expect to come down to Soho.

Lord, how frighten’d I was, when I heard a Russian Bear had laid hold of you with his great Paw, and was dragging you to Russia. – Pray don’t go, if you can help it: Russia is like the Den of Cacus, you see the Footsteps of many Beasts going thither but of few returning. I hope you Fire-Machines will keep you here.

If a Vote or two could be for Service to you, I could write to Mr Coke, Mr Gisburn, and Sir Charles Sedley, and could wait on one or two more if I came up to Town, as Lord George Cavendish, Mr Curzons two of them, Mr Anson, Sir John Wrottesley. If I can serve you by letters with the first three, you must send me their Places of Residence in Town, and if you think the others material to you, I will come up to London for a few Days.

Now how must I direct you? – your Letter is only dated London, like other great Men, no Street or House is mention’d so I shall direct to Mr Boulton.

I want the following Books which I shall be obliged to you to procure for me if you can.

1. I have 27 volumes of Bufon’s Histoire naturelle in 12mo and wish to have what may have been published since, if they can be had in duodecimo like the 27 Volums which I have.

2. I have all the Commentarii de rebus in Scientia et Medicina Lipsiae, from the Beginning [to] the 17th Volum inclusive, and also the Supplementum primum decadis secunda, and also the primae decadis Index triplex. Excepting the sixth and seventh volumes of the said Leipsic Commentaries. Hence please to observe, that I want the sixth and Seventh Volums of the Leipsic Commentaries, and all that have been publish’d since the 17th Volum printed in 1771 and 1772. And since the Secundae Decadis Supplementum primum printed in 1772.

3. I have the first Tom of Linnei Systema Naturae and want the remainder of that Work.

Pray remember me to Mr and Mrs Boulton. – Charles Darwin in now at Christ-Church Oxford, and would be glad to see you, if you return that Way.
Adieu
E Darwin