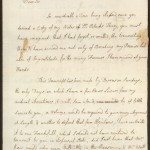 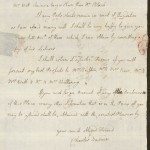 Charles Darwin was Dr. Darwin’s son and studied medicine at Edinburgh University. Dr. Joseph Black was a Professor of Chemistry and discovered the principles of latent heat. This letter highlights the interest Boulton had in science and that the Lunar Society friendships extended to the next generation.

Charles died in 1778 after cutting his finger during an autopsy, which became infected.

So considerable a Time being elapsed since you desired a Copy of my Notes of Dr. Blacks Theory, you must have imagined that I had forgot, or omitted, the transcribing them, & have accused me not only of Breaking my Promise but also of Ingratitude for the many Favours I have received at your Hands.

This Transcript has been made by Degrees on Sundays, the only Days on which I have a few Hours Leisure from my medical Avocations; it will, I am afraid, be of little Service to you, a Volume would be required to give every Argument at Length & another to defend that from Objections, I have contracted it to one Frankfull, which I should not have ventured to transmit to you in its present state, did I not know that Mr Keir would solve every Difficulty in the Reasoning & Mr Watt emend my stating of the Facts – indeed of the Part on Evaporation Mr Watt claims a larger share than Dr Black.

If any Parts should remain in want of elucidation as I am afraid many will I shall be very happy to give you [a] more full acct of them which I can obtain by consulting a copy [?] of his Lectures.

I shall esteem it a partic. Favour if you will present my best Respects to Mrs Boulton, Mr & Mrs Keir, Mr & Mrs Watt & Dr & Mrs Withering.

your much obliged Friend