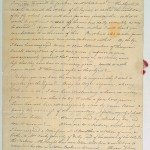 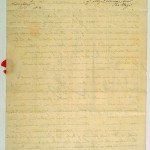 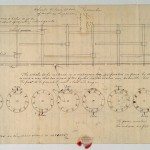 The purpose of this is to ask a favour. It is that you will put the annexed plan into the hands of Mr Whitehurst, and if occasion requires to explain it to him. We have no one here I believe with whom such a job would not be a grievous task, but I suppose it would be familiar to Mr Whitehurst. The object is mearly to count the strokes of the Engine, or rather the revolutions of the fly wheel; and will do so for many years together; so that it would be sufficient to read off the numbers daily or weekly as may be desired: – If you know of any better method I will thank you to substitute it in the room of this. Be so kind also to order for me a common watchmanês timepiece to be sent with it. By the bye I have been surprized to see in some late numbers of Thompsonês Annals descriptions of such time pieces; inferior to yours, and apparently ignorant that yours were in existence, much less that they have been in use many years. Would it not be proper to set Dr Thompson right on this subject? _

Perhaps you may have the curiosity to enquire why I want a register for the Engine? _ Being no longer a spinner, and having little else to do, I have been constructing a Loom on a plan quite new, and am about to try it with a four horse power. Linen has not been advantageously wove by power looms, and having the weakness of other projectors, I flatter myself I shall succeed betterÄhave you tried my absorbing box, and does it answer? _ Allow me to introduce another subject. I have received a letter from Mr Boulbec a relation of mine and brother to Mrs Derby formerly of Derby, and of the widow of the late Sir Thomas Perkins. He thought there were cotton Mills here and wished me to recommend his son as a Cotton Broker in Liverpool. He says –I have great satisfaction in seeing my son much respected in Liverpool and as a man of business etc and I beg to refer you or any friends of yours who may please to favour him with commissions; to Mr John Gladstone, Mr W Hope, Mr Bên Reding, Mr James Pownel Merchêt for their opinions of him as a man of business. He is Cotton Broker to Messrs Unwins, Messrs Hancock and Wakefield, Mr Charles Stanton Hall and Son, Mr I Robinson in Nottinghamshire and at Bolton, Messrs Ormerod and Hardcastle and several at Manchester. I think you will be pleased to receive so favourable account of my sons success, having been in business for himself only twelvemonth.”

If you think the zeal and activity of a young man might be serviceable, perhaps you will be so good to think of him.

Mrs Bage who has just brought the 4th out of the 6 which you originally promised me, desires to join me in best respects to the young Ladies and yourself _

I am Dear Sir

your obliged and sincere servant

The faces to have round holes to go on the round arbors, so as to admit of adjusting when requisite.

The whole to be inclosed in a mahogany box, perforated in front by oblong holes AA, BB &c in such a way that one or part of two figures next the indices may be visible, but the rest concealed. The front to be furnished with a lock and hinges.

The faces revolve the indexes are fixt.