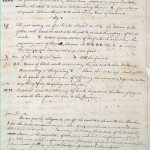 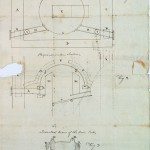 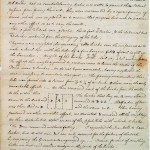 HHHH From Cast metal pipes passing through the wall for the purpose of being cleaned occasionally. IIII Openings to which are fixed 4 earthen chimnies rising through the stove, intended to give out heat in their passage through the drying room Ä In these pipes are 4 dampers to be moved by one Index.

KKKK Air funnels represented by dotted lines, descending perpendicularly within the walls to introduce cold air along the pipes H, from whence it spreads between the pot and its surrounding dome of brickwork.

fg The pot resting on fire bricks shaped as at L, the hollow to be filled with sand on each side the pot to prevent the passage of air or smoke. N Dotted representation of the fine brick supporting the projecting part of the pot, shown at RRRR. Fig 3. to which the horizontal cast metal pipes are fixed.

r One of the horizontal pipes k Cold Air funnel

O.O. Dome of brick work surrounding the pot at 4 Inches distance, terminating the opening P. Above this opening, dash plates to be fixed for the purpose of diffusing the warm air and for preventing any thing from chopping on the pot.

MM Internal circular chimney of brick to prevent the heat going in a direct line from the fire to the Chimnies.

We are greatly obliged to you for the civilities shewn to our blacker, and for the hints contained in your letter, and which will induce us to make some alterations in our plan. Respecting the heating the contents of the Retort by Steam, is the proportion of waterway material in the formation of Gas? If a little more or less is of consequence, (the reason of which I do not perceive) the plan is inadmissible. I will thank you for a hint on this subject.

I have annexed a scheme for warming a drying stove, the best that has occurred to me and will thank you to fulfill your promise of finding all the faults you are able, and also to send one a sketch of your latest improvement, which I am fully prepared to expect is much superior.

I have just completed an experiment on Spherical Arches. From posts 5 feet long 9 by 10 In were let into the ground, so that from center to center of each part formed a parallelogram 10 feet by 9 feet. The top of each Horizontal Section of Stove 10 feet by 8ê inside

The posts immediately beneath the arches were held together by 4 bolts of Inch square Iron. The square space between the 4 arches was filled with hexagon bricks 4 _ Inches deep, so that the spherical arch was 4 _ Inches thick. The courses were wedged and the center removed. I should have observed that as the 4 rib arches, had no counterbalancing arches nor walls to prevent this lateral pressure from forcing them out, they were surrounded by a square framing of wood, which was so placed as to answer that purpose but not to produce any other effect so as to vary the result.

The 9 foot rib arch rose 9 inches the 10 foot 10 11 Inches, and the spherical arch 20 Inches, reckoned from the springing of the Ribs.

They were now weighted, by spreading 2000 bricks over the surface so as to make a level top with the help of a few barrows full of soil to fill up the haunches. Weight of the bricks 5T. – 16 Cwt, soil say 4 Cwt. making 6 tons. The effects this weight appeared to produce was to lower the center of the Dome near 2 Inches _ we do not know accurately, having neglected the means necessary to ascertain that fact. _ The framing surrounding the Ribs was forced into 4 Curves from ⅛ to _ of an Inch and these were the only remarkable effects. _ We then removed part of the bricks from the center to the sides thus. The bricks that lay on A were cleared down the Arch and removed to B and C. _ Half a ton of Iron was then laid on B and the same on C. This having produced no other sensible effect, we desisted and removed all the weighting. We then distributed 43 Cwt on one of the 9 feet Ribs with which it broke. The Dome remained without falling. I expected the Iron bolt to have broke, but it did not, and I can only account for the failure of the Arch by supposing the Green mortar squeezed up. _ Indeed for want of something better we had used wooden wedges in the joints of the bricks.

Thus I feel perfectly satisfied that Brick Beams will answer as well as wood or Iron ones and be cheaper. Do you think that Government would not do something for the encouragement of Fireproof buildings? _ And what is the best method of setting such a plan on foot? _