Home·People·Bage, Charles·Letter from Charles Bage to William Strutt [no date] 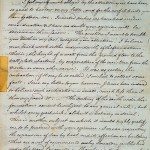 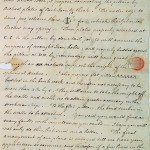 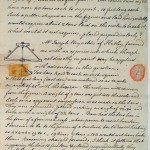 Letter from Charles Bage to William Strutt [no date]

I feel myself much obliged by the attention you have been so good to bestow on my letter, and for the useful hints you have given me. Inverted arches we have had under consideration and I have no doubt your opinion will be decisive in their favour. The question I meant to trouble you with in my last, escaped your attention. I believe new brick work settles independently of the foundations. That is, the height of a wall from the ground floor to the wall plate shortens, by evaporating of the moisture from the mortar or some other cause. It was respecting this contraction (if it may be so called) I wished to collect some facts. Since my letter to you however I have been induced to believe such contraction is small, much less than I then supposed it. – The sinking of the earth under the foundations cannot be subject to any general rule, but whilst every part sinks alike it is not very material.

There is another subject on which it would highly gratify me to be favoured with your opinion. I mean respecting the expansion of Iron by heat and its effect on our building. There are a set of experiments by Smeaton published under the word Pyrometer in Chambers’s dictionary which shows that an addition of 100 degrees of heat lengthens

First Does Cast Iron expand as much as wrought Iron? –

2ndly What are the two extremes of temperature which the Beams would acquire in the course of the year;? it would be nearly the same in our Mill as in yours.

3dly – Suppose no precautions used, would it injure the Walls to force them in and out as the beams contract and expand? …

I think your pillars are near 50 feet long. By the above rule a difference of 30 degrees should push the floor of the upper story 1_ Inch into an arch, supposing it level in the coldest weather. In point of fact does this happen?

Another question arises out of this, whether the weight on the pillars has any power to diminish the expansion?

We are differently advised about the strength of pillars. This shape which nearly resembles yours is doubtless the strongest, and I think yours do not exceed 4 Inches, the large way, even on the first floor. Our lower ones might have near 40 tons each to support, 10 feet long.

Such a pillar shaped as in the figure and laid horizontally would require about 2 tons laid on the center to break it. What would it not require, placed perpendicularly?

Mr Joseph Reynolds of Ketley [?] favoured me with an experiment which though not directly in point may be applied with advantage in this question. Two bars A and B each an inch square and three feet long (cast iron) were inclined so as to make an angle of 45_ with the horizon. The rest you will conceive from the figure. A weight of 7 tons was put into the scale and little or no apparent impression was made on the bars. They were afterwards placed making an angle of 22_ and 3’0 and broke with a weight of 3_ tons. Now had the bars been in the form of a four-inch cross, whose power to resist breaking I conceive to be to the power of a One Inch bar to resist breaking as 4 x 4 + 3 = 19 to 1, 19 times 7 tons = 133 would not have broke them. Reasoning straight forwards, I think it follows that supposing the bars 10 feet long and placed perpendicularly they would have been equally immoveable had the weight been 57 tons. I hope you will pardon me, though I know not what apology to make for impeding on your time on which I have no claim. I am sir very respectfully your most obed servant
Chas Bage