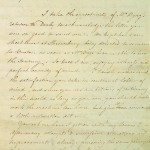 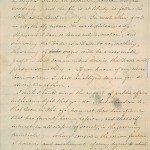 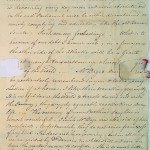 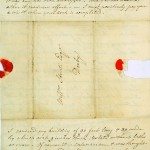 I take the opportunity of Mrs Bageês return to Derby to acknowledge the letter you were so good to send one. We kept her a very short time at Shrewsbury being directed to remove to Buxton as soon as Mrs Bage became able to bear the journey. So here I am, enjoying idleness and perfect vacuity of mind. I hardly understand the satisfaction you take in continual labour of mind, and since you are ambitious of continuing in this world as long as you can, you should not work the machine too hard, but give it occasionally a little relaxation oil.

You ask me how I get on with my Looms? _ After many attempts and successive alterations and improvements, always pursuing the same principle I have produced the only Loom, as far as I know and believe, that answers well for Linen. The Principle is this. All the motions are produced by weights which are gradually raised, and fall suddenly; and the fly is at liberty to follow the cloth as in hand weaving. In most others if not in all, the fly moves its exact distance only.

At present I have 10 looms only in motion; and supposing the Trade as a Trade to pay nothing, the saving of wages will be a reasonable profit. But comparribus Annis the Trade must produce something. If you know of my clever loom motions I shall be obliged to you for a description of them.

I wish I could view the aspect of public affairs in the same light that you do; but when I consider that men in this age have not that love of Country that has formerly been a passion, and that self interest in all classes of society, is the governing principle; – when I consider the copious fountain of honours and imoluments of every degree to which such multitudes look up with hope and expectation, I see an active principle at work against which there is no counterbalance. So that Government is becoming every day more and more absolute, and in the end Parliament will be either discontinued or merely complying and adulatory like the old Roman Senate. Such are my forebodings. What is to become of our debt I know not; in a few years the other side of the Atlantic will be a Giant great enough to swallow up almost rest of the WorldÄ Mrs Bage desires to be particularly remembered to you and to the young Ladies if at home. I like their travelling propensity; it is useful to see the world and travels do not end with the journey; they supply agreeable recollections during life. _ The recovery of your Brotherês daughter is almost wonderful. I wish Mrs Bage was also rid of her complaints. Unfortunately they do not arise from excess of any kind. She does not bear lowering; but in all things we are guided by Dr Darwin in whose skill and care have the greatest reason to confide. She is so much better than she has been, that we confidently hope she is in the right road to recovery. It surprizes me to hear the Buxton waters represented as very Active. It is tasteless, and yields….