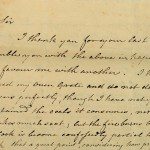 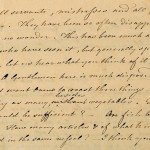 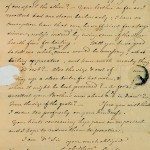 I thank you for your last letter, and trouble you with the above in hopes you will favour me with another. I have reduced my Oven Grate and do not doubt it answers perfectly, though I have not yet ascertained the coals it consumes, not whether it makes much soot; but the fire burns brighter. The Cook is become confessedly partial to it, and I think that a great point, considering how prejudiced almost all servants, mistresses and all, are against alterations. They have been so often disappointed that it is no wonder. This has been much admired by those who have seen it; but generally speaking they say, let us hear what you think of it a year hence. A Gentleman here is much disposed to try. He would want Ovens to roast three things _ and means for boiling as many besides vegetables. In end what would be sufficient? _ Are fish boiled in steam? How many articles and of what kinds may be boiled in the same vessel? _ I think your under
“cover has two chambers; might meat and vegetables be cooked together, or would the droppings or flavour of one spoil the other? – Your brother as far as I recollect had one steam boiler only; I have no conception how that can be sufficient for a large dinner, unless indeed by using some of the other hearth fires for boiling. Will you be so good to tell me what sized ovens would be necessary; what boiling apparatus, and how much nearly they would cost? _ Also the size and cost of setting up a close boiler for hot water, and where it might be best procured? _ As far as I recollect your Brotherês were about 2 feet 6 Inches in diameter 2 time the size of the grate? _ I fear you will think I draw too profusely on your kindness.

Your hints, concerning Lye pans are important and I hope to reduce them to practice.

I am Dear Sir your much obliged and obedient servant