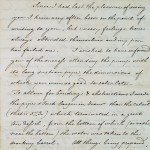 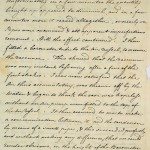 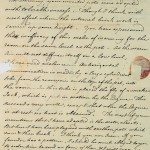 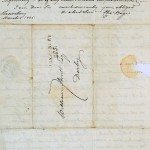 Since I had last the pleasure of seeing you I have very often been on the point of writing to you, but uneasy feelings have always obtruded themselves and my pen has failed me. I wished to have informed you of the success attending the pump with its long suction pipe, the dimensions of which you were so good to calculate – To allow for bending and obstructions I made the pipe 1 Inch longer in diamr than the calculn (that is 5_ In) which terminated in a great Air Vessel, from the bottom of which (or rather near the bottom) the water was taken to the working barrel. All things being prepared and the Air Vessel and Pipe nearly filled with water, the Engine was set to work. Unfortunately in a few minutes the quantity brought up appeared to diminish and in a few minutes more it ceased altogether, or nearly so. Pipes were examined and all apparent imperfections removed. Still the effect continued. I then fitted a barometer tube to the Air Vessel, to measure the vacuum. This showed that the vacuum was every instants lessening after a few of the first strokes. I was now satisfied that the Air thus accumulating, was thrown off by the water and began to think the case was hopeless without an Air pump were fitted to the top of the Air Vessel. It then occurred to me to make a communication between it and the condenser by means of a small pipe, and this succeeded perfectly, and without making any difference that we could render obvious, in the height of the Barometer attached to the Condenser. Since then we have had not farther trouble. The pipe brings so much water as we want, though not always a full stroke, owing I think to some accidental obstruction.

For warming, your invented pots were adopted with tolerable success. Though I think with most effect when the internal brick work is carried up some height. You have experienced the inefficacy of this mode of warming for the room on the same level as the pot. As the warm Air will not diffuse itself on a low level, I have used violence. – An horizontal communication is made by a large cylindrical tube, form the reservoir on the top of the pot, into the room. In this tube is placed the fly of a smoke Jack, which is put in motion by the Engine. This succeeds very well, except that when the Engine is at rest no heat is obtained. The next of your inventions that I have adopted is the water closets. But here I have been plagued with earthen pots which now and then break. I think you use Iron. If your founder has a pattern, I should be much obliged to you to order him to send us four of them, and I will repay you. I have taken the liberty of requesting your Brother to give me the strokes p miss: length of stroke and size or weight of the head and of falling stocks for washing thread. – When you have leisure will you have the goodness to favour me with an Account of your proceedings relative to the Infirmary – or any other curious improvements? –

I am Dear Sir most sincerely your obliged