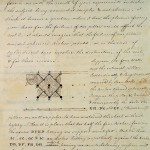 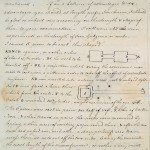 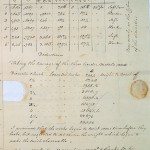 I flatter myself it will not be long before you favour me with the result of your experiments on Arches the subject being somewhat complex and not obvious. I think it became a question when I had the pleasure of seeing you how far the failure of one pillar would affect the rest? _ I should imagine that the failure of one pillar amidst spherical Arches, would, as in the case of cylindrical ones involve the destruction of the rest and for these reasons. Suppose the four Walls and the internal pillar latitudinally and longitudinally connected by Iron Bolts, and the arches turned spherically. Imagine the pillar E destroyed and consequently the bolts BE, EH, DE and EF. The surrounding pillars we will suppose to have sustained the shock without injury. Then it is plain that one half the four Arches, forming the square BFHD having no support must fall. But the lines AC, CC, GC, and IC are arches butting respectively against the Arches DB, BF, FH, DH, which having no counterbalancing pressure will be thrown done, and thus the whole square ACIG will go. Perhaps whilst the pillar E falls, the bolts DE, EG and EH in breaking may also break their antagonist bolts, and so the whole would fall; but this is a danger common to cylindrical arches, and as our business is comparison, need not be mentioned. If on a balance of advantages and disadvantages you should at length prefer Iron beams, I should be glad to submit my reasoning on the strength and shape of them to your examination. I will now add some experiments on the strength of Iron Gudgeons or nicks. I caused 6 pieces to be cast thus shaped AB & CD squares, or rather cubes of about 1_ Inch sides. BC the neck to be twisted off. DE a projection which during the experiment was made to rest upon a pillar in order to take off the effect of perpendicular pressure. AB was inserted into a strong wood post and wedged tight. Which from the center F to the notch G measured 35 3/8 Inches, weight exclusive of the eye 16lb. The 6 pieces were cast in pairs, one half of soft, and the other of harder iron, and when turned in pairs, the necks were measured by lapping a thin piece of writing paper round them, and after the two ends has passed over each other, a sharp penknife was drawn across them so as to cut off the two ends, leaving the remainder the exact length of the circumference, or rather a very small fraction longer. They were then measured by a fine graduated Scale. The following table exhibits the results.

of the the lever the neck

Very nearly as the cubes of the diameter

Taking the average of the three harder metals.

I perceived that the necks began to twist some time before they broke, but neglected to set down the weight which began to make the twist observable.

I hope Mrs Shutt will accept my compliments and thanks for her hospitality and attention to me. _ Believe me Dear Sir your obliged Servant