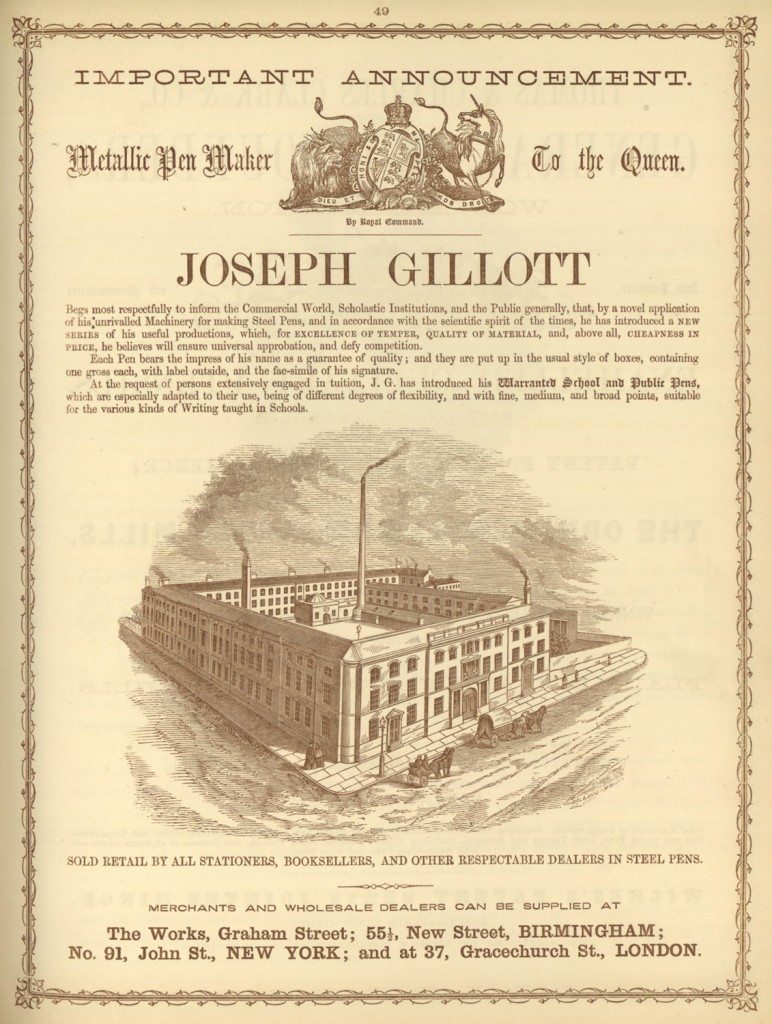 The Steel Pen – now in almost universal use – affords an example of the ingenuity manifested by Englishmen in creating a new trade and of their perseverance in developing its capabilities by cheapening its productions. Thirty-two years ago quill pens were the only writing instruments in use; but about that time steel pens were introduced and although at first, from being made by hand, they were very costly – some having been sold at sixpence and even one shilling each – they rapidly grew in public favour. The increasing demand rendered it imperative on manufacturers to devise extended facilities for production and led to the invention of machinery of the most delicate and ingenious description for the purpose of cutting, stamping, slitting and grinding pens. At the same time improvements were made in the mode of preparing the steel, especially in the process of hardening, tempering and colouring the metal. These various processes have attained such a degree of perfection and are performed with such inconceivable speed, that good pens may be bought for so low a price as four-pence per gross and thus even the poorest person in the kingdom is enabled to purchase effective writing materials, the cheapest pens now made being very superior in quality to the best produced some years ago. For many of the improvements in the pen trade the world is indebted to Mr JOSEPH GILLOTT, one of the earliest manufacturers, if not actually the inventor of steel pens. This gentleman and Messrs. HINKS and WELLS are now the largest makers of pens in the world and we do not exaggerate in estimating their united annual production at more than three million five hundred thousand gross.