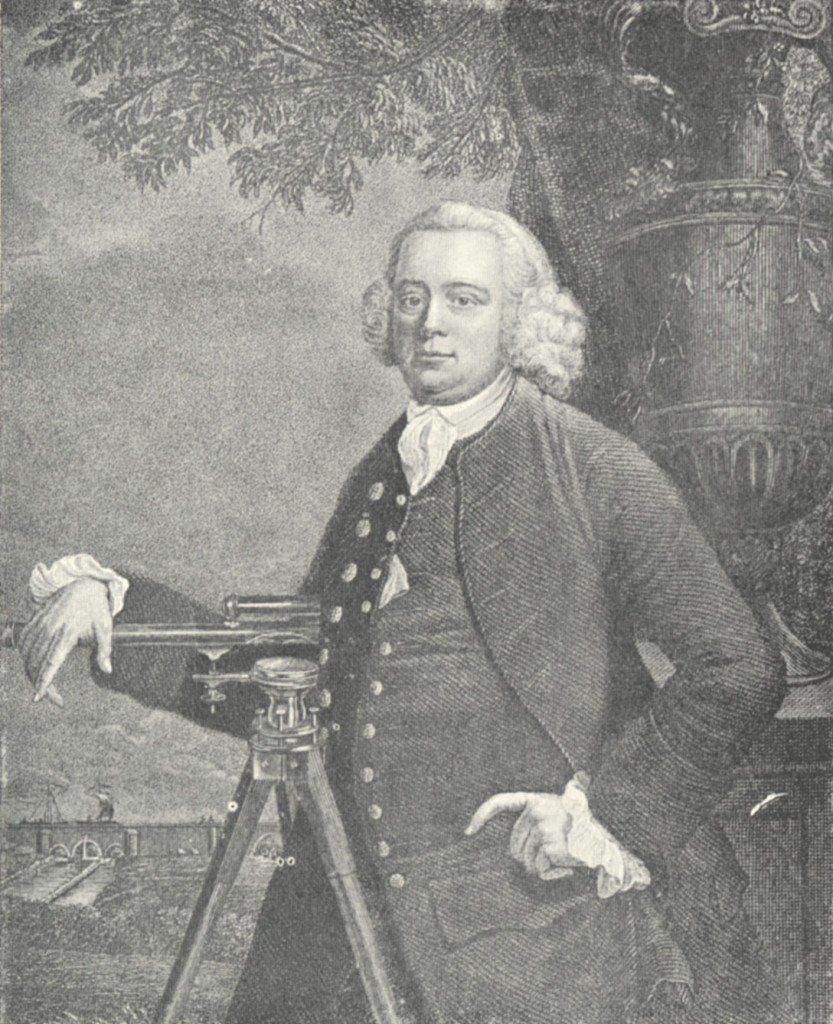 Portrait of James Brindley from Samuel Smiles, Lives of the Engineers, vol. I (London, 1904). Brindley is armed with his surveying equipment. A scene in the background shows one of his major achievements, the Barton Aqueduct on the Worsley to Manchester Canal over the River Irwell.

James Brindley was born at Tunstead, near Buxton in Derbyshire the son of a farmer. As a boy he showed little inclination for book learning, but his talents were revealed by making models of water and wind mills. In 1733, he was apprenticed to a mill and wheelwright near Macclesfield in Cheshire and in 1742 he created his own business in Leek in North Staffordshire. His work on water mills also involved constructing ways of managing flows of water. His fame spread and he undertook a variety of work, including draining pits, constructing a Newcomen atmospheric engine, repairing water pumps and building a variety of mills. He conducted work for Josiah Wedgwood, Lord Anson and Earl Gower including surveying a route for a canal between the Trent and the Mersey.

His significance as a canal engineer took off after 1759 when he began work for the Duke of Bridgewater. Brindley created a canal between the Duke’s coal mines at Worsley, near Manchester and the town itself. On completion in 1761, the Bridgewater Canal was a major engineering achievement. One feature, the Barton Aqueduct carried the canal over the River Irwell and visitors flocked to see barges on the aqueduct travelling over boats on the river. The canal was also an economic success, reducing the price of coal in Manchester and stimulating production in the Duke’s pits. Brindley extended the enterprise to build a second Bridgewater canal.

In 1766, he began building the Trent and Mersey or Grand Trunk Canal. This was a much more substantial engineering achievement with 76 locks, 160 aqueducts, 213 road bridges and a lengthy tunnel, the Harecastle Tunnel. This canal was widely supported by landowners and industrialists in the West Midlands, including Earl Gower, Matthew Boulton and Wedgwood. A link to this canal, the Staffordshire to Worcester Canal connected the Trent to the Severn at Stourport. Brindley envisaged a “silver cross” of canals connecting the Mersey, Trent, Severn and Thames. The final link was provided by the Coventry and Oxford Canals which connected Fradley Junction on the Trent and Mersey to the Thames at Oxford. He also created additional waterways in the Midlands and the north. In total, Brindley built 360 miles of canals.

Whilst surveying a branch canal to the Trent and Mersey, Brindley caught a chill. Despite expert care by Dr Erasmus Darwin, he died in 1772 and was buried on Harecastle Hill, close to his famous tunnel. Darwin penned a tribute to Brindley in his poem The Economy of Vegetation:

“So with strong arm immortal Brindley leads
His long canals, and parts the velvet meads;
Winding in lucid lines, the watery mass
Mines the firm rock, or loads the deep morass,
With rising locks a thousand hills alarms,
Flings o’er a thousand streams in silver arms,
Feeds the long vale, the nodding woodland laves;
And Plenty, Arts and Commerce freight the waves.”

Download PDF of article
Sources and Further Reading Bode, Harold, James Brindley (Shire Publications, 1999). Boucher, C T G, James Brindley Engineer, 1716 – 1772 Evans, Kathleen M, James Brindley, Canal Engineer – a New Perspective (Leek, 1998) Smiles, Samuel, Lives of the Engineers, vol. I (London, 1904).
Most read
Chronology of principal events that occurred during the Industrial Revolution in the West Midlands. Significant places in the historic counties of Derbyshire, Herefordshire, Shropshire, Staffordshire, Worcestershire and Warwickshire during the Industrial Revolution. Industrialists, engineers, artists, thinkers and writers who contributed to the Industrial Enlightenment, technology, art, culture, religion and politics. Explorations of industries and innovations; landscapes and localities; art and architecture; culture and diversity; and the place of the West Midlands in the contemporary world.
Revolutionary Players was developed between 2002 and 2004 and financed by the New Opportunities Fund. Revolutionary Players was created by Dr Malcolm Dick & Dr Kate Iles and managed by Birmingham Museums until 2015. Revolutionary Players is now published and funded by History West Midlands.