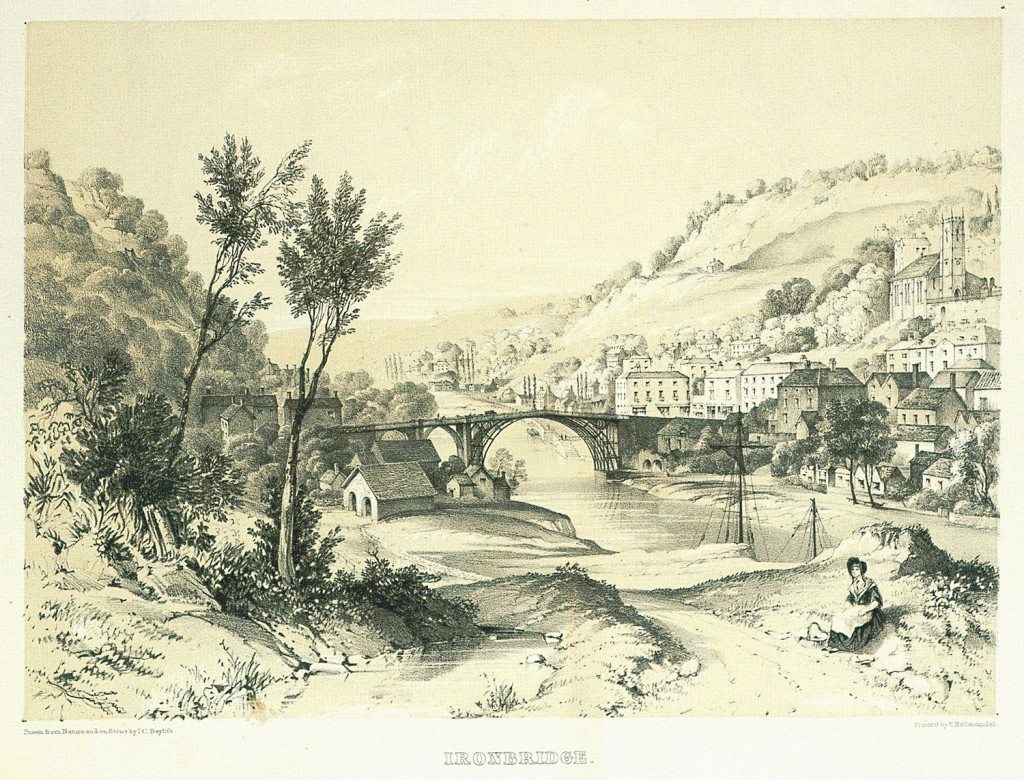 IRONBRIDGE is a town, in the franchise of Wenlock, thirteen miles east of Shrewsbury, on the northern bank of the Severn. The beauty of its situation, at the mouth of a winding glen through which the Severn takes its course, is peculiarly remarkable, and its surrounding scenery is full of variety. The outline of the hills on each side of the river, is very grand; and the villas, cottages and gardens, which adorn their sides, together with bare rocks, wild shrubs and forest trees, give a striking character to the whole. The bridge itself, which gives name to the town, was thrown over the river in 1779, and is generally believed to have been the first iron bridge ever erected; it was cast in Coalbrookdale, and is admirable for its strength, lightness of effect, and symmetry. The Church, of gothic construction, is of more date, having been completed in 1836.

Lincoln Hill, on the right of the picture, stands as a promontory amongst the valleys, and in itself, contains many sublime and beautiful scenes. One side of it is very precipitous, and has deep and lofty excavations beneath its surface, from whence limestone has been dug. It abounds with fossils of shells and vegetable substances, and is a favourite resort of the adventurous traveller. The other side forms a portion of the boundary of the valley of Coalbrookdale, and is so rich in beauty, that it has obtained the name of Paradise.

The wooded hill, on the left of the picture, is Benthall Edge; a beautiful spot, so full of pictures, that if Shropshire had no other claims for fine scenery than can be found here, she need not droop amidst her sister counties. Every object is here that is needful for landscape: precipitous hill and wooded valley – sleeping pools and murmuring waterfalls, form an endless and untiring variety; while from its summit, as from that of Lincoln Hill, a wide extended prospect stretches before you, of the plain of Shropshire, the Wrekin, the Stretton Hills, the Long Mountains, the Breidden; and in the extreme distance, the Welsh Mountains bound the horizon.

The Severn, in the foreground, middle, and distance, reflects as a mirror the brightness of the sun, and the glory and loveliness of the scene, on a fine summer’s evening, cannot be described. In the distance of the adjoining view of Ironbridge, is a hill, from which the most charming view of the valley and adjacent hills is obtained.