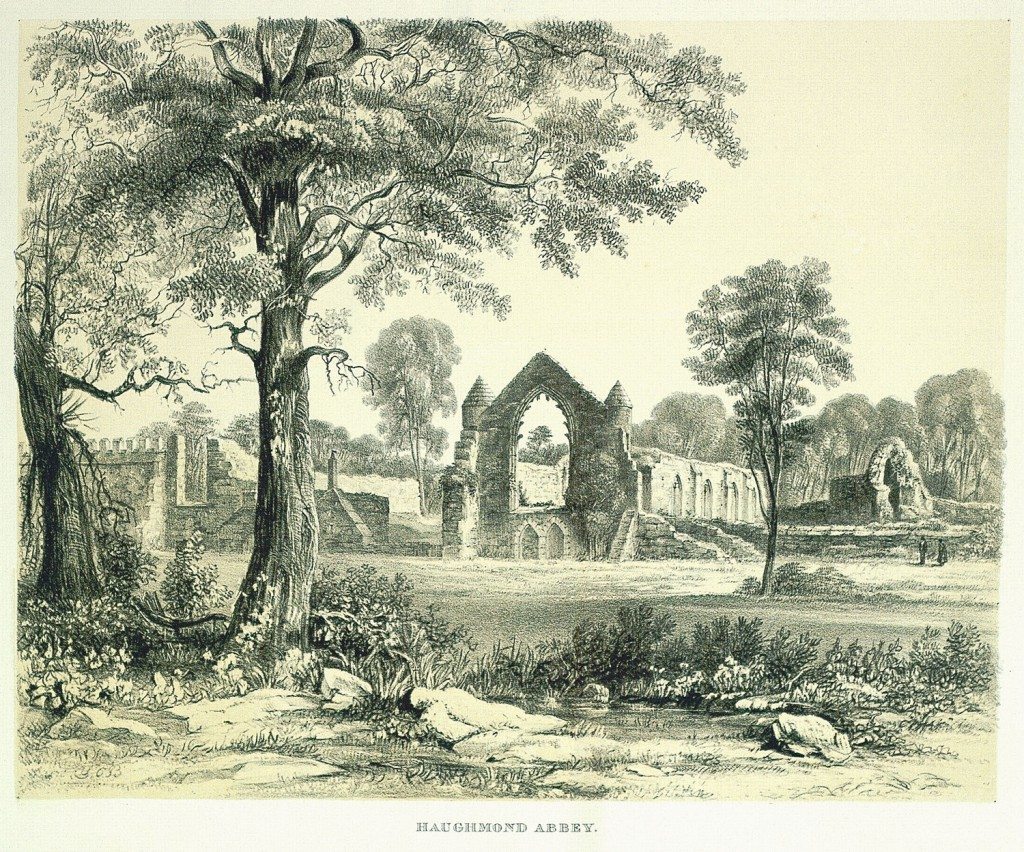 “Haughmond Abbey, of the order of Canons regular of St. Augustine, was founded in the year 1100, by William Fitz Allen” – Beauties of England and Wales.

HAUGHMOND ABBEY is one of the most interesting ruins the County of Shropshire presents, on account of its situation in the midst of a landscape, rendered famous by historical events of the greatest moment, as well as by its own intrinsic beauty and its extent. In the times of the struggles between the houses of YORK and LANCASTER, and again in the reign of HENRY the FOURTH, this land, with the adjacent country, was the scene of several bloody contentions: and pieces of armour, and relics of past time, are constantly dug up in the vicinity.

The venerable white walls of the Abbey, and the dark hill that is behind it, with its triangular turret, are conspicuous objects for many miles over the great plains of Shropshire. It admits of several views of individual parts which would form good pictures; and one from the wood behind, looking down into the midst of the ruins, and over them to Shrewsbury, with Sundorn Castle through the archway of the great window, attracted the artist’s attention considerably, and was only overbalanced in his choice of the present view, by his desire to embrace as much of the best part of the Abbey as possible, and to exhibit it as generally seen. The looking down, also, into the ruin from above, with objects of importance in more favourable situations, deteriorated in his mind, from the nobleness of the Abbey, though it added distance to the landscape.

The great window in the centre of the picture belonged to the great hall, and was once filled with beautiful tracery and stained glass; now the green ivy clings to it, and adorns it with a melancholy beauty. The side windows are more perfect.

The chapter house is behind the left turret, and is an object of great admiration on account of its fine oak roof.

The particulars of the remains are well described in “The Beauties of England and Wales,” and in “HULBERT’S Town and County of Salop.”

Immediately in front of the Abbey is Sundorn Castle, a beautiful and picturesque building, surrounded with noble trees in groups and masses well adjusted for the painter. The proprietor of this mansion is also the owner of Haughmond Abbey.