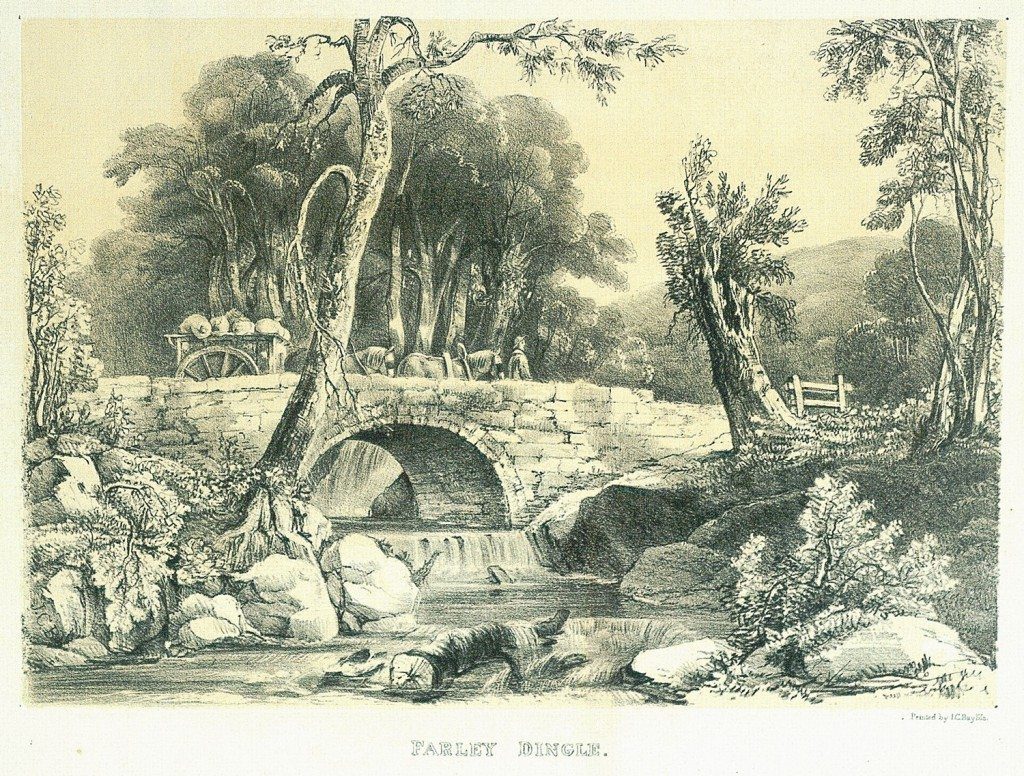 The lovely valley between Wenlock and Buildwas, called Farley Dingle, is one of the many which run in an opposite direction to the course of the Severn, intersecting the mountains which border its sides. A traveler will be amply repaid by a stroll through any of them. The rustic bridge, the babbling brook, the aged tree, the creeping ivy, the towering rock, the deep precipice, the well-clothed wood, the simple cottage, are all here, each in its best place; to alter, would be to mar the perfection of the whole.

The bridge, of which the adjoining drawing is a representation, is in as picturesque a situation as can be imaged. On one side is a group of trees that have been left entirely to nature; their bare roots creeping over the mouldering rock to the water’s brink, and fixing themselves in the moister earth; their stems hidden by the flourishing ivy that is decaying them; their branches above, mingling together, and forming the most agreeable shade: at their feet, and amongst them, runs the small brook, which, in two cascades, above and below the bridge, forms a continual murmur. This brook divides the parishes of Buildwas and Wenlock.

On every side of this scene, except one, rise well-wooded hills; on the side of one of which is cut the turnpike road to Wenlock. A very fine view is obtained here of the Wrekin, through the only opening of the valley, the hills forming striking objects for the foreground. A volume might be well filled with scenes from this Dingle.

About half-a-mile from this place is Tickwood Hall, most delightfully situated, the residence of CAPTAIN HILL; a little further, the rural village of Wyke; and beyond is Benthall Hall, a fine old mansion, the property and residence of the HARRIES family, of this county. The abbeys of Buildwas and Wenlock are each about a mile and a half distant; and the beautiful residence of WALTER MOSELEY, ESQ, about two miles.

Several flour mills are erected on the brook: and there are some extensive lime quarries in the neighbourhood.