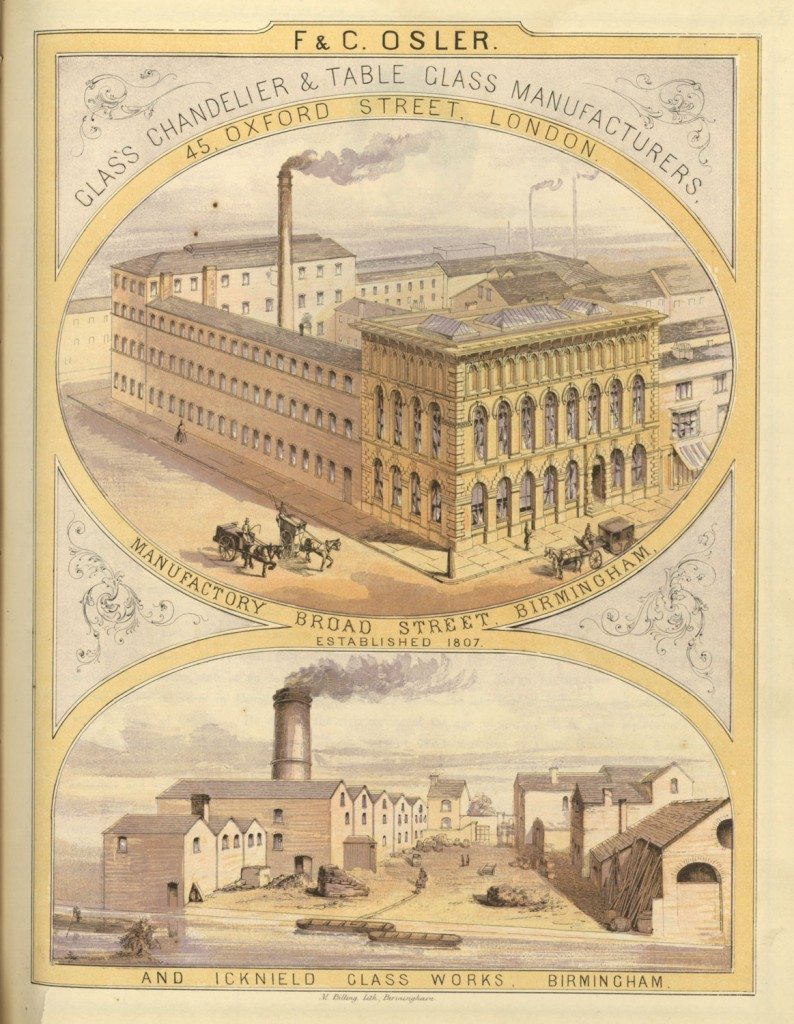 Plate Glass is made in different ways; one kind – that supplied by Messrs. Chance, Brothers and Co, of Spon Lane, for the Great Exhibition building, in 1851 – is produced in the following manner:- The workman having collected a ball of molten metal on the end of the iron blower, first distends it by blowing it into a spherical form and then, after heating it in a furnace, goes to the edge of a pit, not unlike a saw-pit, and whirls the mass round until it has acquired a cylindrical shape. When the cylinder has become long enough it is detached from the blower. It is next cut off level at both ends and allowed to cool; a line is drawn down the centre by a cold iron dipped in water and the cylinder is then placed in a furnace, or muffle, on a bed of smooth stone or Paris plaster. The furnace door is closed and under the influence of heat the glass slowly flattens into a sheet; it is then annealed and is fit for cutting up into panes. Glass Shades we may here remark, are also made by being alternately blown and then swung round in the pits above described and when they have become sufficiently long, are detached, cut at one end and annealed. Originally, these shades were made almost exclusively in France, but they are now blown by Englishmen to a far greater size and with much more precision of form then has ever been effected in a foreign manufactory. The plate glass made by blowing and flattening is technically termed sheet glass. The best plate is made by casting, an exceedingly beautiful and delicate process, requiring much greater care than any other branch of the manufacture. The materials are melted into a liquid state and the fused mass is tested by being carried in large ladles to an iron table, where each portion is separately examined and then returned to another pot, which is thus gradually filled with pure glass. When a sufficient quantity for one casting has been collected, the metal is re-melted and is then allowed to cool slightly to become viscid. The vessel containing the molten metal is next drawn out of the furnace, hoisted by a crane and at a given signal its contents are poured in a continuous stream on to an iron table, along which a pair of polished iron rollers instantly pass and reduce the glass to the proper thickness. The process of annealing having taken place, two plates of glass are then placed face to face and ground and are next taken to the polishing room, where they are placed on machines furnished with felt-covered polishing rubbers run in the opposite course and so the plate receives a thorough cleansing and it is fitted for use either in the construction of mirrors or for the best window glass. The material used in polishing is red oxide, which imparts a uniform red colour to the machinery, the workmen’s dresses and the walls of the room. Sometimes when – as in the case of Messrs. Chance’s works – there are hundreds of these polishing machines at work at one time, the scene is worthy to be ranked amongst the most singular that can be conceived.