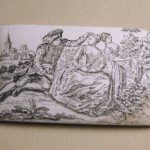 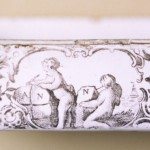 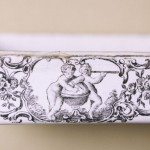 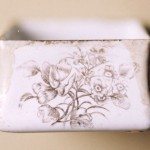 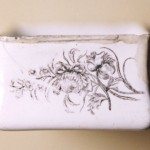 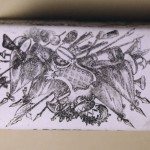 By the middle of the 18th century freehand painting in enamel colours had long been practised in England, and gold boxes with painted enamel decorations were well known and highly prized. But they were far too costly for all but the very rich. Technological developments such as machinery for rolling copper and the invention and exploitation of transfer printing enabled affordable enamels to be produced, for sale in England and export to Europe, even as far as Russia.

The trade flourished in Battersea in London and Birmingham, Bilston, near Wolverhampton ,Wednesbury and Liverpool. The majority of items are mainly associated with South Staffordshire production in Bilston and Wednesbury. One of the most important Birmingham manufacturers was John Taylor, who employed several hundreds persons. Matthew Boulton had an interest in the trade, and produced some enamelled etuis, caskets, candlesticks and snuff boxes at the Soho works.

The lifetime of English painted enamels spans only some fifty years in the second half of the 18th century. By the end of the century the trade declined: the price of copper and wages increased and the export trade with the Continent was ruined by Napoleonic Wars.
The painted or printed subjects reflect taste and fashions of the Rococo or Neo-classical period, or political and social events of the time.

One of the finest collections of English 18th century enamels in the country is held at two Wolverhampton locations, the Art Gallery and Bantock House. At the present time there are about 700 items in the collection. Among them are bonbonnieres, snuffboxes, patch boxes, plaques, scent flasks, buttons, medallions and so on. The collection has grown in three stages. In 1929-1934 Mrs K.P.Bantock presented almost a hundred enamels to Wolverhampton. In 1937 Gerald Mander gave assistance to purchase the Egan Mew Collection. Mew was one of the first serious collectors of English enamels. In 1966 the Bilston Museum & Art Gallery became part of the Wolverhampton Art Gallery and Museum Service. The Librarian and Curator at Bilston, Mr L.E.Taylor, had been collecting enamels for some years and his collection later became a significant part of the collection. Since then there have been additional gifts and purchases.