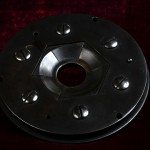 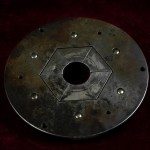 At his Soho Mint, Matthew Boulton pioneered the striking of coins within collars, thus ensuring a uniformity of shape and size which had previously been unattainable in the production of British coinage. Such a step made the forgery of coins a more difficult process. Boulton also experimented with cutting grooves in the collar, so that the resulting coins would have a milled edge, and with engraving inscriptions on the edge of the coin before or after it was struck.

The segmental collar, however, enabled this work to be done in one simple step. This type of collar, designed by the die-sinker Jean-Pierre Droz, was first seen by Boulton during a visit to the Paris Mint in 1786. The collar is formed of six metal segments, set inside a rim which is hexagonal inside and circular outside. Each of the segments has raised letters which would press into the edge of the blank as it was struck, thereby leaving an inscription around the edge of the finished coin. The segments are attached to the rim by means of hinges, thereby allowing some movement so that the finished coin could be released.

Boulton was greatly impressed by Droz’s design, and invited him to come to the Soho Mint, an invitation which Droz accepted in 1788. There Droz created this particular segmental collar, which today appears to be the only surviving example of his invention. This collar is set with the inscription ‘RENDER TO CESAR THE THINGS WHICH ARE CESARS’ (Matthew xxii 21). Several pattern halfpennies struck in the collar, with the dates 1788 or 1790, are still in the Assay Office’s collection.

However, the success of the segmental collar was rather short-lived; it was found to be too slow and difficult to use, and thus was soon replaced with more user-friendly methods. Droz’s contract was broken, and Conrah Heinrich Kuchler became the chief die-sinker at Soho from 1793 onwards, taking responsibility for the production of the official copper coinage from 1797 onwards.