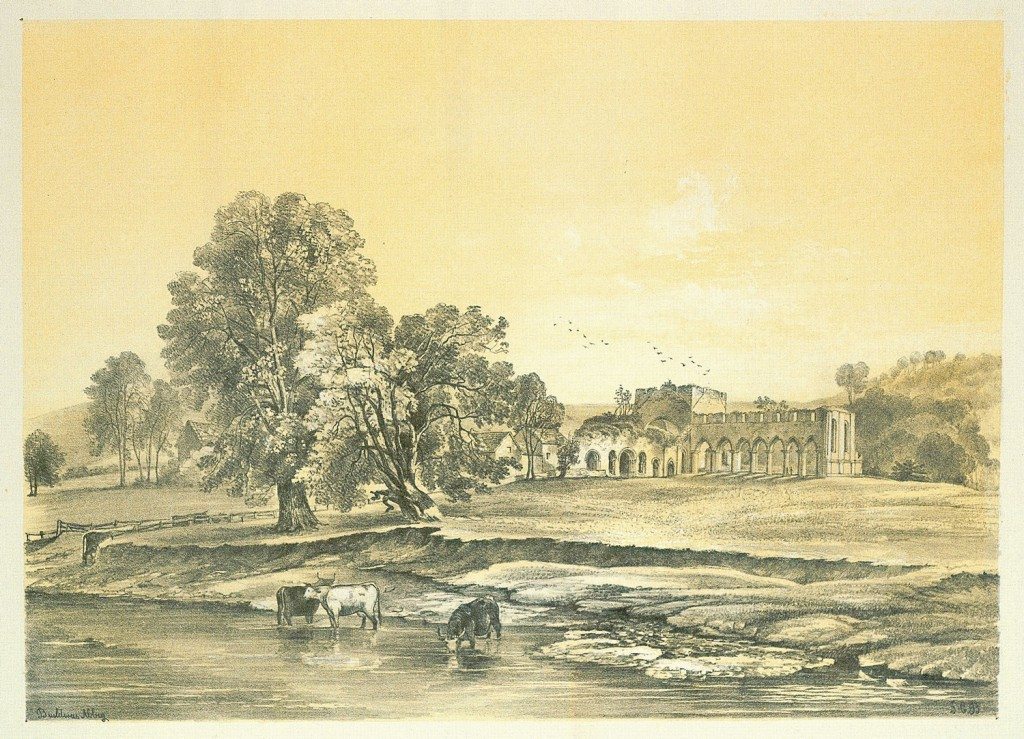 Buildwas Abbey lies on the south bank of the Severn, two miles from the Wrekin, in the midst of a fertile tract of land, backed by gently rising hills, clothed with wood. The most considerable portions that remain are the church, the chapter house, two other vaulted rooms, some detached arches, and other buildings changed into a farm house. The church is cruci-form, and had a massive tower over the cross, supported on pointed arches, resting on brackets in the walls. It is remarkable, that contrary to the universal custom, there never was any western door to this church, the window, as seen in the drawing, alone occupying that end of the nave. The choir end of the church was lighted by three narrow windows, which remain, having round arches, as have the arches of the clere story over the pointed arches that support the walls of the nave, on strong pillars; the indented carving on the capitals of which are still, generally, in beautiful preservation. The side aisles are quite gone, but marks in the walls shew the form of their roof, and that they had groined ceilings.

The chapter house is seen on the left of the abbey; its door and windows round arched, and richly moulded. It has a groined ceiling, supported by slender round and octagonal pillars placed alternately, forming three aisles; this is still entire, but instead of the abbot in his stall, and the monks in their order, arranging the business and discipline of the time, faggots and tools of husbandry scatter the floor. The refectory, abbot’s lodge, and other buildings were situated more to the left, and only detached parts of these remain.

The Abbey was founded in 1135, by ROGER, Bishop of Chester, and dedicated to St. Mary and St. Chad. At its dissolution in 1538, it possessed lands and liberties in Shropshire, Staffordshire, Derbyshire, and Dublin, to the amount of £129. 6s 10d annually, a sum equal to about one thousand pounds in our present currency. Twelve monks resided here. In 1402 – 3, Owen Glendower, the Welsh chieftain, made many incursions into the English territories, and committed great devastations. In one of these he came to Buildwas, plundered the monks and burned the Abbey.

The situation of the Abbey is as delightful as can be imagined; and from the hills above it are the finest prospects. The opening valley widens into the plains of Shropshire; and the Severn winds along the fields in so circuitous a path, that a cannon ball discharged would pass five times across its channel.

Eastward, a new scene presents itself. The valley contracts, the hills are more precipitous, and Benthall Edge, Marnwood, the heights of Lincoln Hill, with the church of Ironbridge, group in beautiful perspective. Near the Abbey is an elegant iron bridge crossing the Severn; also Buildwas Park, a mile distant.