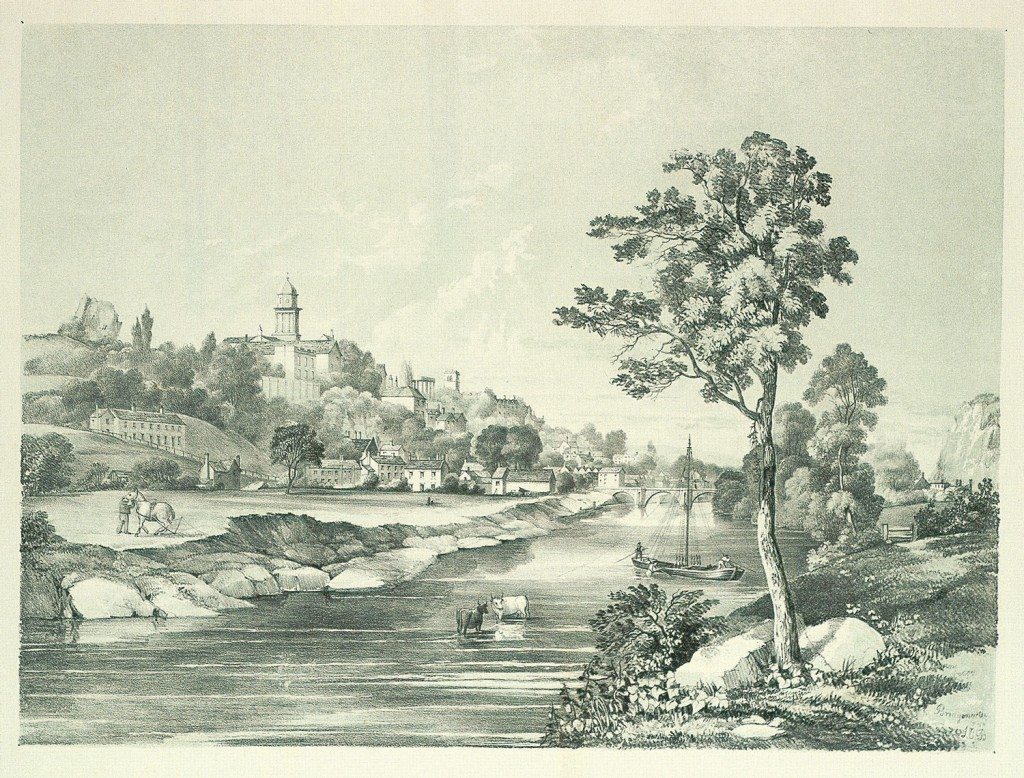 BRIDGNORTH is a town most pleasantly situated on the summit and sloping sides of a rocky hill, rising in the midst of valleys chiefly surrounded by hills, at the base of which the Severn flows. It is of remote origin. Founded by the daughter of ALFRED the GREAT, widow of a prince of Mercia, it enjoyed the favour and patronage of the Saxon monarchs; being a favourite resort with them, as it was also a strong-hold fortified both by nature and art. At the accession of the Norman barons to the manorial rights of the Saxon lords, this place passed into the hands of ROGER DE MONTGOMERY, but was wrested from his son, who defended it against HENRY the FIRST, in favour of ROBERT his brother, the eldest son of WILLIAM the CONQUEROR. After it had remained in possession of the crown about half a century, it was besieged again by HENRY the SECOND, a rebellious and haughty Baron (HUGH DE MORTIMER) having seized it. On this occasion HUBERT DE ST. CLAIR rendered his name memorable, by stepping before his sovereign to receive an arrow aimed at him from the enemy. The king proving victorious the castle reverted to the crown, and so continued till in the reign of RICHARD the THIRD it was granted to LORD DUDLEY, whose descendents however did not long retain it. Its final destruction took place in the civil wars preceding the commonwealth. Siding with the unfortunate monarch, the town of BRIDGNORTH was besieged by some parliamentary forces for Shrewsbury, taken, and the castle destroyed, the only portion remaining being the leaning tower on the left of the drawing.

The church near this ruin is St. Mary Magdalene’s, a modern structure, built within the area of the castle, on the site of an ancient chapel founded and endowed by the first Norman possessors. The Church in the distance is St. Leonard’s, originally built about the year 1448; it was destroyed by fire at the taking of the town by the parliamentary forces, and again rebuilt. The building on the summit of the hill, supported by pillars, is the reservoir, into which water is forced from the Severn for the supply of the town. Along the summit of the hill from the castle is a beautiful terrace walk, from which the country round is seen to great advantage. Beneath this walk in the perpendicular sides of the rock are formed cavities for houses, approached by steps cut also from the solid rock; these, overhung by trees, shrubs, and wild flowers, add not a little to the picturesque nature of the place.

The hill on the right is “The Rock;” immediately adjoining is Morfe, once a royal hunting forest, in it is a cave called “The Hermitage,” having been inhabited as such by the brother of king ATHELSTAN. Some ancient tumuli are here. Bridgnorth is a borough town which sends two members to parliament.