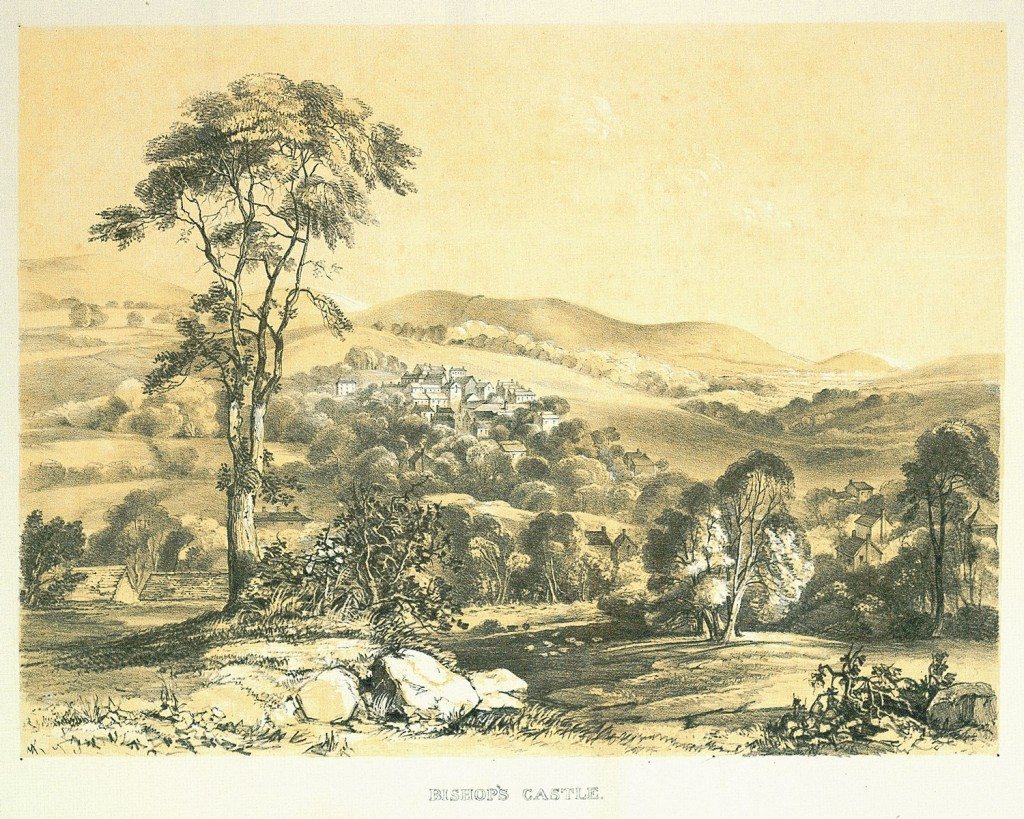 BISHOP’S CASTLE is a town in the south-west of Shropshire, about twenty miles from Shrewsbury, and eighteen from Ludlow. The town is said to derive its name from a castle that once stood within it, belonging to the bishops of Hereford; but scarcely a vestige of this castle now remains, its site, indeed, being converted into a bowling-green. It stood on the open space a little to the left of the centre of the picture, and commanded a most charming prospect of country. The town itself is small, consisting of one or two streets, some detached houses, a church, a town hall, a school-room, and a bank. The church is almost hidden by trees; it stands at the foot of the hill, on the right of the picture, and is only seen on a near approach to it. Two members of parliament formerly represented this town, but now it is disenfranchised. The objects that will gratify the tourist in his visit to Bishop’s Castle are, the variety, beauty, and magnificence of the scenery on every approach to it; the undulating hill and vales; the ceaseless change of light and shadow on the landscape; and the almost boundless prospects from the summits of the mountains. On several of these there are traces of ancient encampments, of which the one on Tongley Hill, called “Bury Ditches,” it very celebrated; this mountain forms a prominent feature in the scene from the town, and beyond it are seen the Clun Hills.

A little to the left of the picture is a high hill called “Mote Hill”, round the summit of which, on a mossy turf, is a broad and even race-course, where occasionally the diversion of horseracing is practiced. From this hill is seen one of the most extensive panoramic views the neighbourhood affords; the eye ranges over an immense extent of country; the towns of Montgomery, Chirbury, and Middleton about ten miles distant, are distinctly visible; and on clear days Powis Castle, nearly twice that distance, can be distinguished.

Walcot Park, a residence of the EARL OF POWIS, embosomed in mountains, and luxuriant in all that nature, wealth, and taste can furnish, is about an hour’s walk from Bishop’s Castle, on the Ludlow road.

The drive from Bishop’s Castle to Stretton, through Plowden vale, is truly enchanting; the road winds through a labyrinth of valleys, and, hemmed in by the surrounding mountains, the traveller is frequently led to wonder by what unseen turning he will be extricated. Every minute presents a new combination of scenery, and the gratification is indescribable.