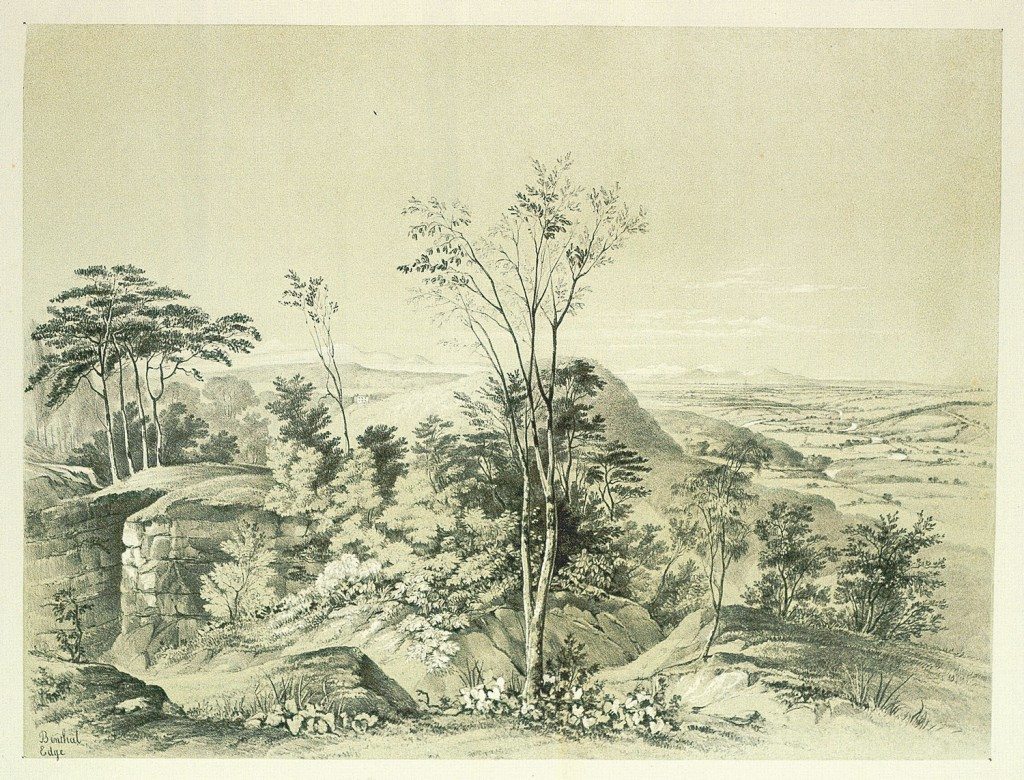 THIS subject has been named in several of the preceding descriptions as forming an interesting portion of Shropshire scenery. It is the entrance to the vale of the Severn, forming its southern bank, and rising almost perpendicularly from the shore. BENTHAL EDGE is a favourite promenade for the lovers of the picturesque, amongst the inhabitants and visitors of the neighbourhood. The most delightful panoramic views are obtained from it. The accompanying drawing is taken from a spot near the cottage, about a quarter of a mile from the venerable manor house, and looks towards Shrewsbury. It embraces an extent of country intimately connected with English history. The distant hill on the left is the Caradoc. Its name commemorating that of CARACTACUS the British hero, suggests to us his conflicts, trials, and magnanimity. In after times, the Saxons disputed title with the Welsh, throughout the scene of border land, and then the Normans carried their forces hither, built numerous castles, harassed the Welsh, and finally under the EDWARDS, subdued them, and annexed the country as a principality to the English crown. In the distance of the picture was fought the memorable battle of Shrewsbury, and numerous skirmishes since in the unsettled times of CHARLES the FIRST and CROMWELL, have left their traces in ruined castles, broken walls, and shattered towers.

In the vale immediately beneath lie the remains of Buildwas Abbey, where the quiet scenes of monastic life for centuries were carried on, and the valley resounded with the solemn chants of praise.

The neighbourhood has experienced two earthquakes within the memory of man. One is 1773, principally felt in the Birches, (some fields to the right of the picture,) which were strangely changed in their form and appearance, the bed of the river forced up, and its course changed; and the other in 1836, less injurious but more widely felt.

The hill in the centre of the picture, with the house on the left is Tickwood, beyond on the right is Buildwas Park, the winding Severn, Leighton, Shrewsbury spires and monument, the Breidden Hills, and the Welsh mountains.