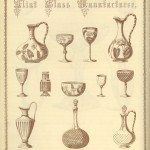 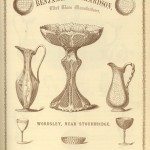 The manufacture of glass is a subject that might well tempt us to exceed our limits. The various conjectures as to its origin, its extreme antiquity, the innumerable purposes to which it is applied, its decorative uses and difficult graduations by which it has been brought to its present condition of excellence, are all branches of the subject on which volumes have been written without exhausting the ample stores of material, or examining more than the chief points in the history and developments of the trade. Herodotus claims the discovery for Egypt or India; Josephus, for the Israelites; Pliny assigns it to the Phoenicians; Layard found glass vases in the excavated ruins of Nineveh. We cannot pause to examine the early history of glass making, nor can we do more than glance in passing at the perfection to which, in the Middle Ages, the manufacture was raised in Venice, in Bohemia, in Spain and in parts of Germany. Of the introduction of the trade into England, we can only say that Bede mentions it as a branch of manufacture carried on even in his day; that it had attained some importance about the middle of the sixteenth century; that it declined in the reign of William and Mary, that it sank still lower under the Georges and that only since the repeal of the duty, a few years ago, has it reached the gigantic proportions which entitle it to rank amongst the most important of English manufactures. The trade has been settled in the midland district since 1557, about which year it was introduced by a refugee, named De Henzell, or De Henezell, a scion of the ducal house of Lorraine, driven from his native country by religious persecution. De Henzell and a small band of companions in misfortune , fled to England and wandering through the country came to Lye Waste, near Stourbridge, where according to tradition their attention was attracted by the fire clay, which they recognised as similar to that used in their own country for making pots used in the production of glass. Taking advantage of this circumstance, they commenced the glass manufacture and in the course of time extended it to many other places within the district, meanwhile improving their own position by intermarrying with some of the principal families. To a member of this family we owe an improved method of making plate-glass and also the invention of the ‘lear’ or annealing chamber, the process of annealing before his day having been effected by placing the articles on the top of the melting furnace. It is interesting to know that a descendant of the De Henzells, under the name of Ensall, is still connected with the glass trade, as a dealer in Birmingham.

Glass making did not take its place amongst the trades of Birmingham proper until almost a century ago, but since that time it has made such rapid strides as fully to justify the supposition that its existence amongst us is of much longer date. The trade has progressed in a marked degree since the removal of the duty cheapened the finer kinds of glass, which are those chiefly made in Birmingham – flint, plate and coloured glass, for example. In the course of this notice we shall have occasion to speak of the various kinds of articles made in the glass trade of the district. It is desirable however, that this enumeration should be preceded by a description of the processes by which sand, potash, lime, oxide of lead and other unpromising materials are formed into the brilliant transparent substance which is called glass. The three divisions of the glass trade with which we are concerned are the manufacture of (1) CROWN, (2) PLATE, and (3) FLINT glass. The bases of all these are silica – the vitrifiable ingredient – and a metallic oxide. The proportions of the ingredients vary according to the kind of glass to be made and according to the custom of particular glass works. The following table represents the materials and the proportions in which they are generally used:-