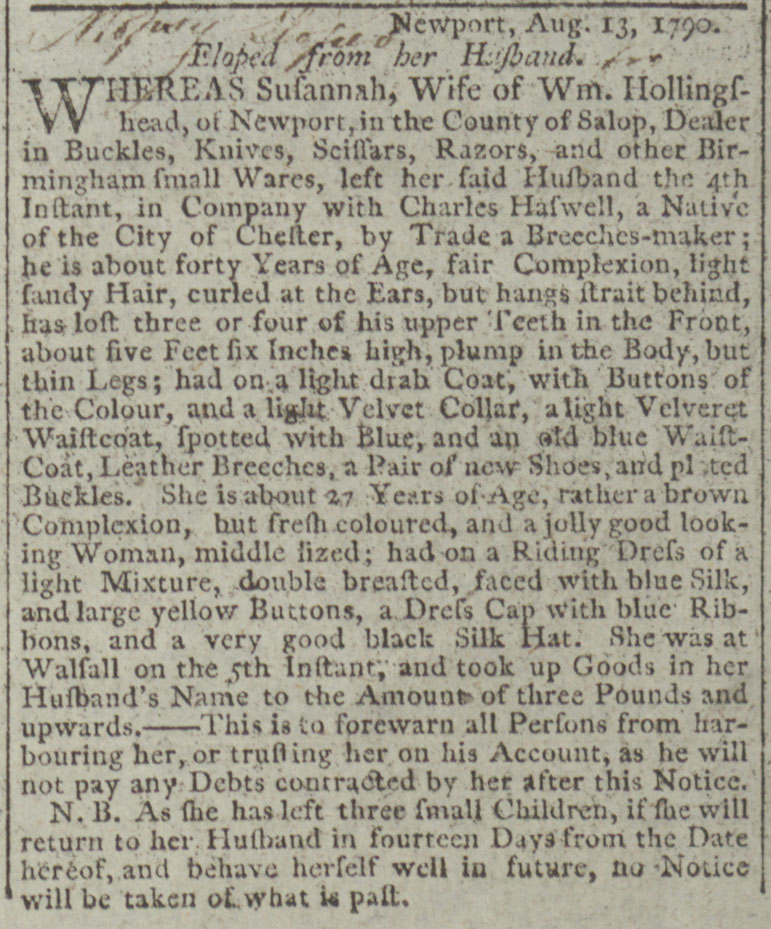 Eloped from her Husband,

WHEREAS Susannah, Wife of Wm, Hollingshead, of Newport, in the County of Salop, Dealer in Buckles, Knives, Scissars, Razors, and other Birmingham small Wares, left her said Husband the 4th Instant, in Company with Charles Haswell, a Native of the City of Chester, by Trade a Breeches-maker; he is about forty Years of Age, fair Complexion, light sandy Hair, curled at the Ears, but hangs strait behind, has lost three or four of his upper Teeth in the Front, about five Feet six Inches high, plump in the Body, but thin Legs; had on a light drab Coat, with Buttons of the Colour, and a light Velvet Collar, a light Velveret Waistcoat,, spotted with Blue, and an old blue Waist Coat, Leather Breeches, a Pair of new Shoes, and plated Buckles. She is about 27 Years of Age, rather a brown Complexion, but fresh coloured, and a jolly good looking Woman, middle sized; had on a Riding Dress of a light Mixture, double breasted, faced with blue Silk, and large Yellow Buttons, a Dress Cap with blue Ribbons, and a very good black Silk Hat. She was at Walsall on the 5th Instant, and took up Goods in her Husband’s Name to the Amount of three Pounds and upwards. – This is to forewarn all Persons from harbouring her, or trusting her on his Account, as he will not pay any Debts contracted by her after the Notice.

N.B. As she has left three small Children, if she will return to her Husband in fourteen Days from the Date hereof, and behave herself well in future, no Notice will be taken of what is past.